Lake Bolsena is one of the magnificent sights of Italy. It has been considered a lake of great spiritual importance…. and mystery, for thousands of years. It was the sacred lake of the Etruscans and it still has a powerful  effect on anybody who visits its shores. The painter William Turner passed by here in 1795 and he like us, would  have marvelled at the the magnificent light, the clearness of the air even in high summer, and the picturesqueness of its lakeside villages such as Capodimonte and Bolsena town. 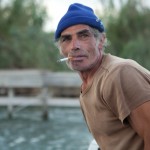 CAMERA ETRUSCA will take you all around its shores. Bolsena is still a working lake, the fishing industry thrives in the village of Marta which is one of favourite places with its brightly coloured fishing boats, narrow cobbled streets and ancient buildings.The fisherman come in every morning with their catch of perch, pike, eel and coregone the local speciality – it’s quite delicious and not at all like a freshwater fish and you’ll find it all the lakeside restaurants.  The fishermen with their weather lined faces and air of bonhomie are happy to be photographed with their nets and paraphernalia. This is an excellent place to practice portraiture. 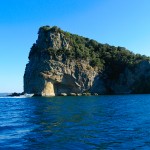 On occasions we hire a boat to visit the islands which, with their high cliffs surmounted by chapels and ruins, are like something from a gothic novel. The rock is honey coloured tufa, the sand is volcanic and black. Occasionally around the islands it is possible to spot a flamingo, while grey herons, egrets and the gorgeously coloured bee-eater are common.

High on the ruins of Visentium

Legend has it that the Etruscans migrated from drought stricken Lydia in Asia Minor  around 900 BC. When they first saw the vast expanse of fresh water that is Bolsena it must have seemed like an earthly paradise to the parched navigators. Not surprising that they made the lake the centre of their cult, and it was somewhere here on its shores that the gathering of the clans took place every year, the mysterious Fanum Voltumnae  the exact location of which is still wrapped in mystery.

Bolsena is a lake of  miracles. St  Christina was mercilessly tossed into the lake by her pagan father, who thoughtfully tied a rock round her ankles, this may well refer to the Christian vanquishment of the pagan Voltumna. 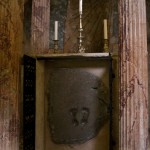 The rock tied around Christina’s feet to sink her, and on which she miraculously floated back to the surface, is the prized relic of Bolsena’s beautiful miracle church, and whatever its origins the stone has two small footprints clearly visible.

A photographic  excursion to Lake Bolsena can easily last all day there is so much to see, do, and photograph. This is one of the great landscapes of Italy, or perhaps we should say lakescape.