The Val D’Orcia is one of the most famous valleys in the world even though the name itself may not mean much. Tourists have travelled the Roman road called the via Cassia since the 16th century on the Grand Tour, but before them it was trod by pilgrims on their way to Rome and before that the Roman Legions. In fact scenes from The Gladiator were filmed here. 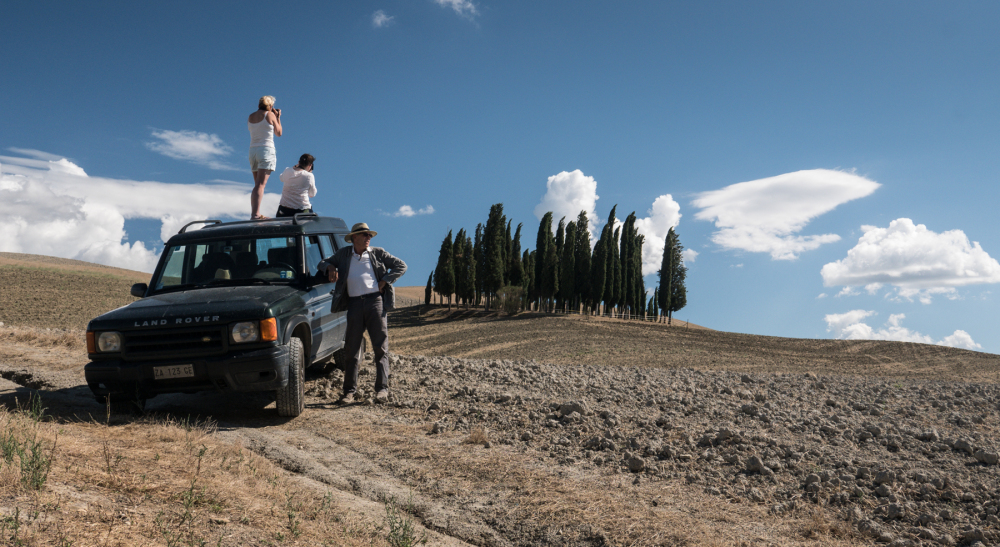 The Medici family constructed Post Houses along the road to welcome the Grand Tourists on their travels. We visited the Osteria Grande in Radicofani and photographed its abandoned interior in 2017. Personally I love photographing uninhabited ghostly buildings. Constructed in 1584 , it has welcomed through its doors almost every celebrity to have ever visited Rome before the age of rail. Mozart was here with his father Leopold, Charles Dickens complimented the spacious, carpeted quarters with its open fire. The Austrian Emperor Franz Joseph II, Stendhal, Chateaubriand and many more stopped over. 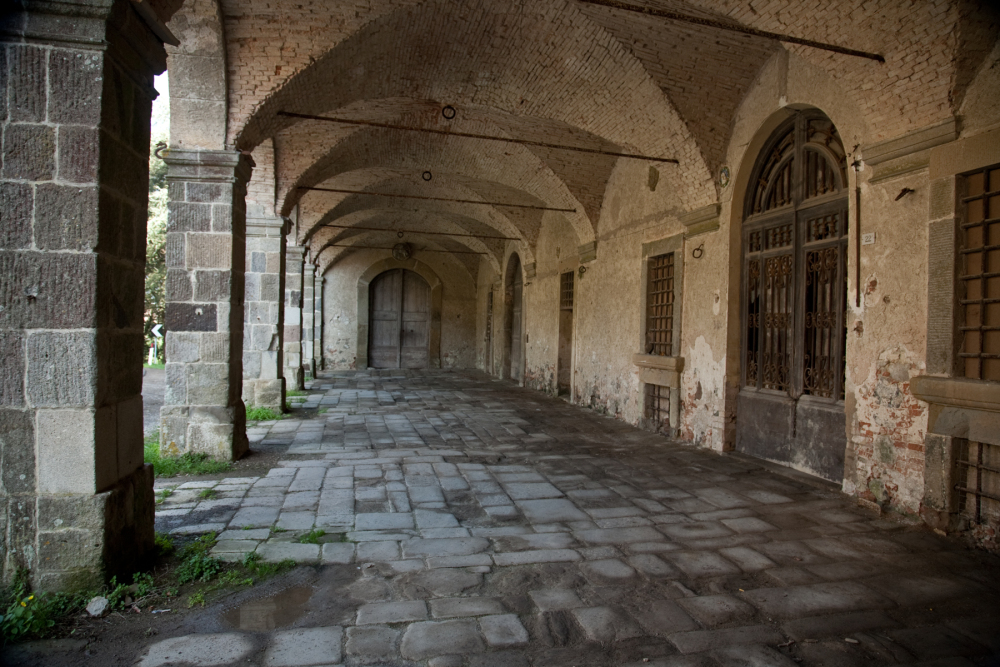 Medici Post House portico, Radicofani  with rings for tethering horses. Known as Osteria Grossa, the Great Hostelry. The coach house door is at the far end. 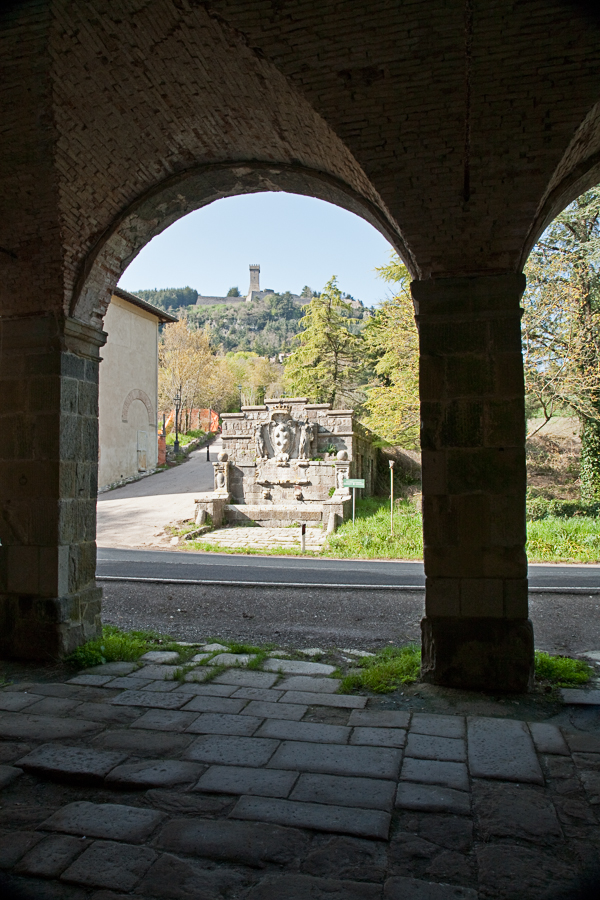 The Medici Portico, fountain and horse trough from 1603. The Six Balls are the Medici Arms. This was sketched by William Turner in 1828 when he stayed here. 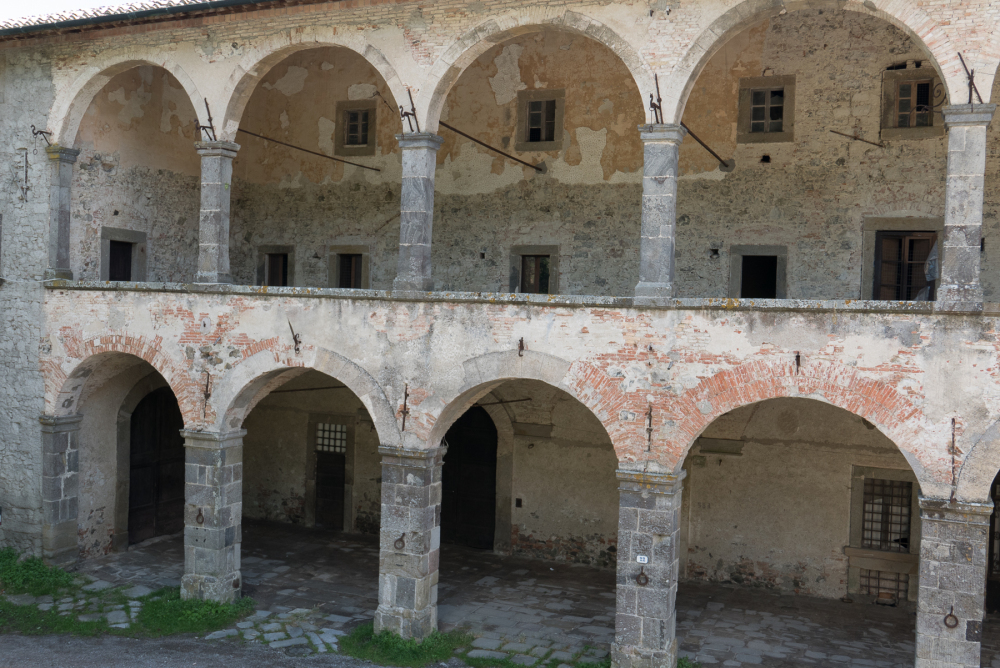 The Medici Hostelry from the road 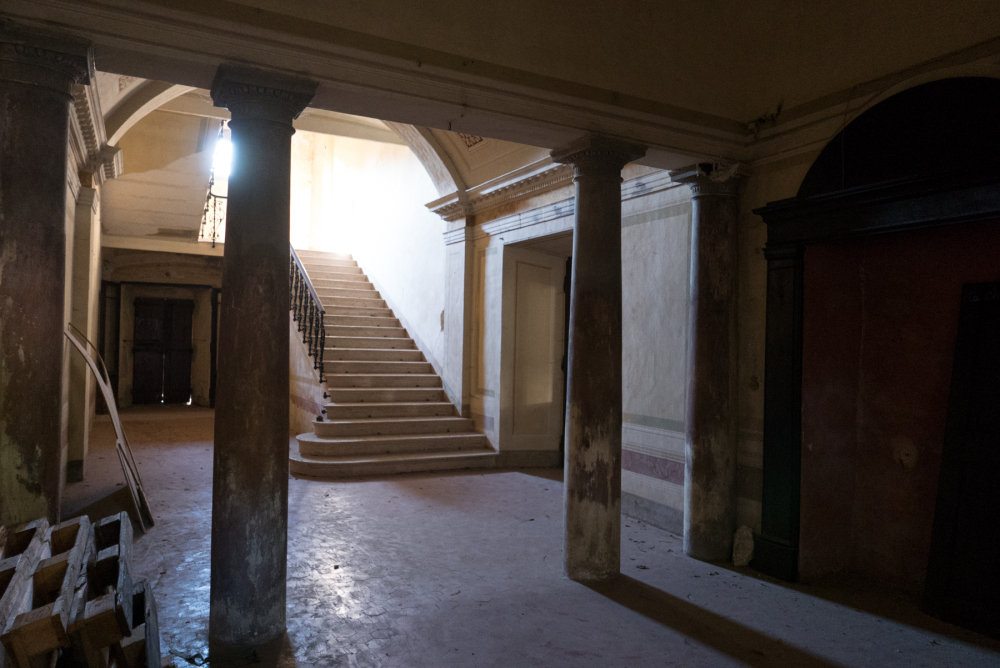 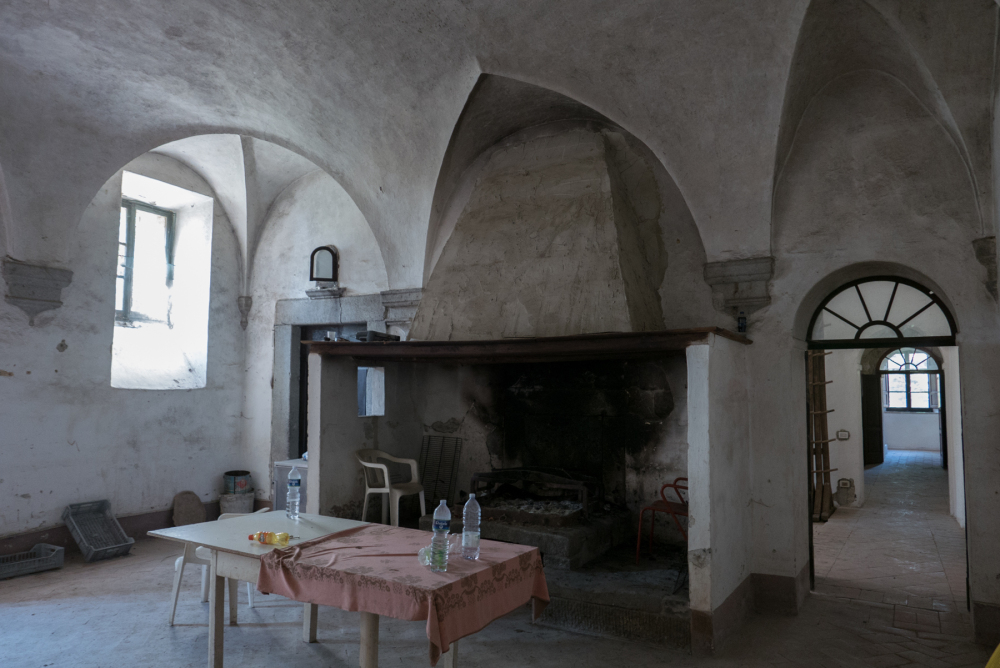 Radicofani stands at 800m and it was notoriously cold in the travelling season of Spring and Autumn. This was the only fireplace other than the Popes’ quarters so very often  ‘milord’ would sleep in front of this fire with his servants rather than in the door-less, unheated rooms upstairs.  An alternative was to sleep in the basement in his coach warmed by the horses.

The Basement was warmer 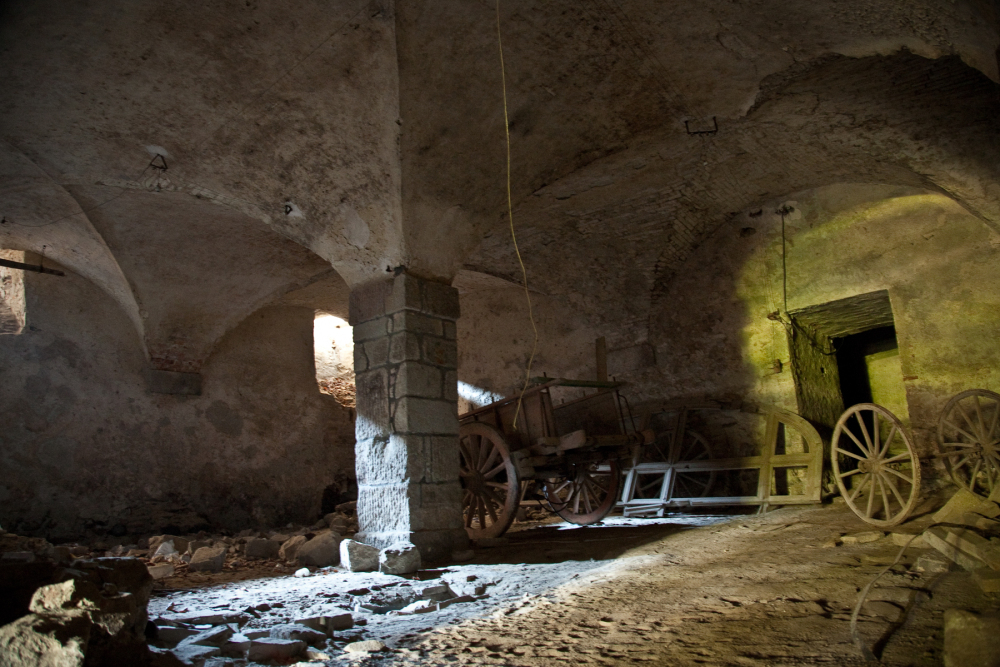 stables in basement of Medici Hostelry 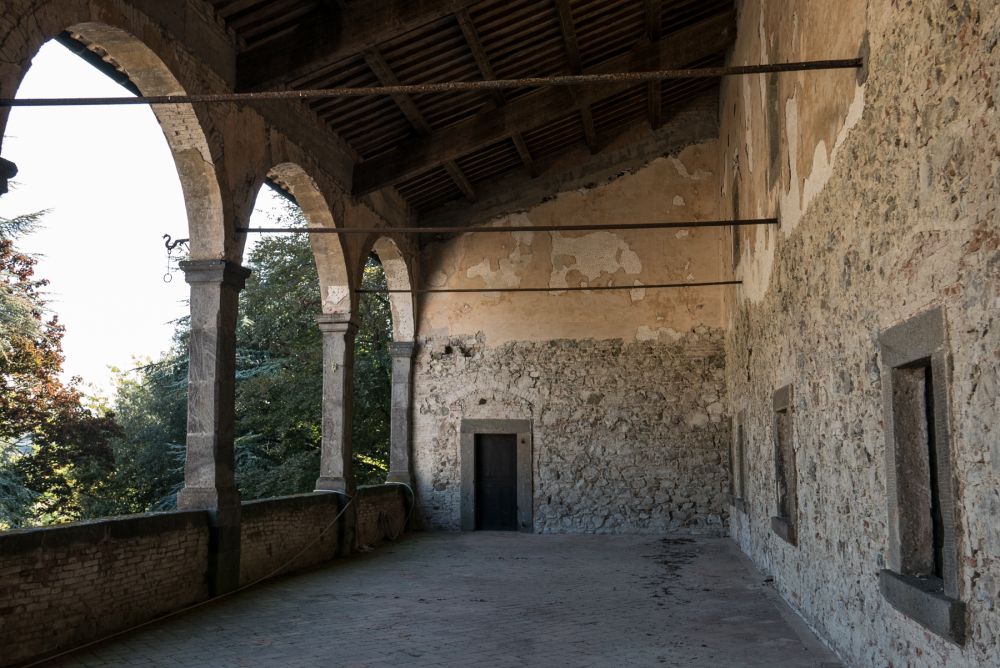 The Loggia affords a  fine view up to Radicofani town with its castle above. 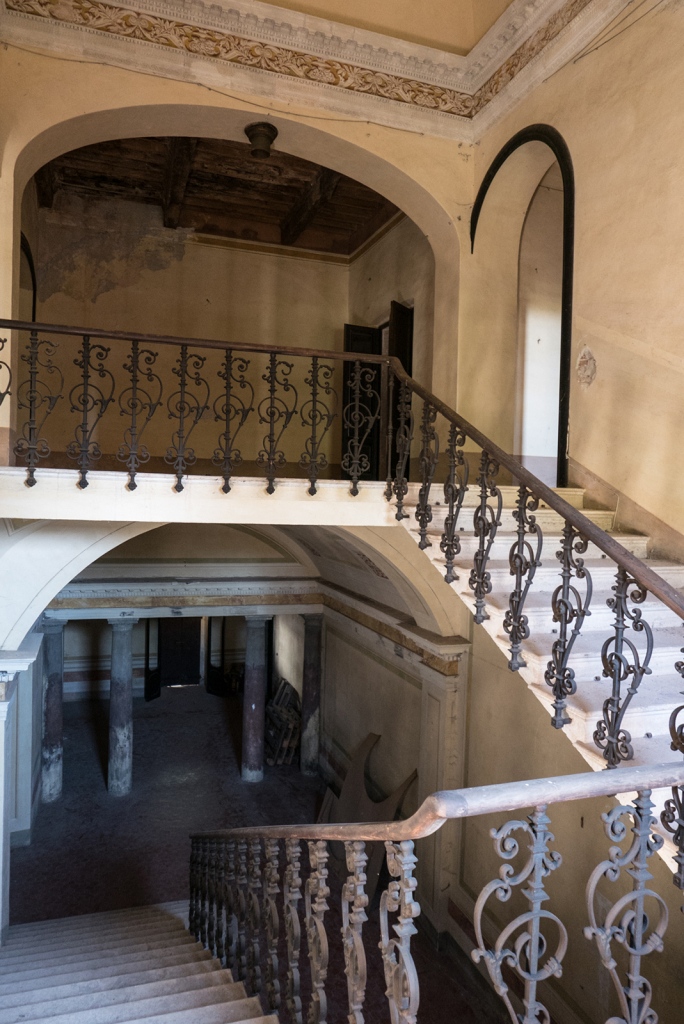 Popes had it better 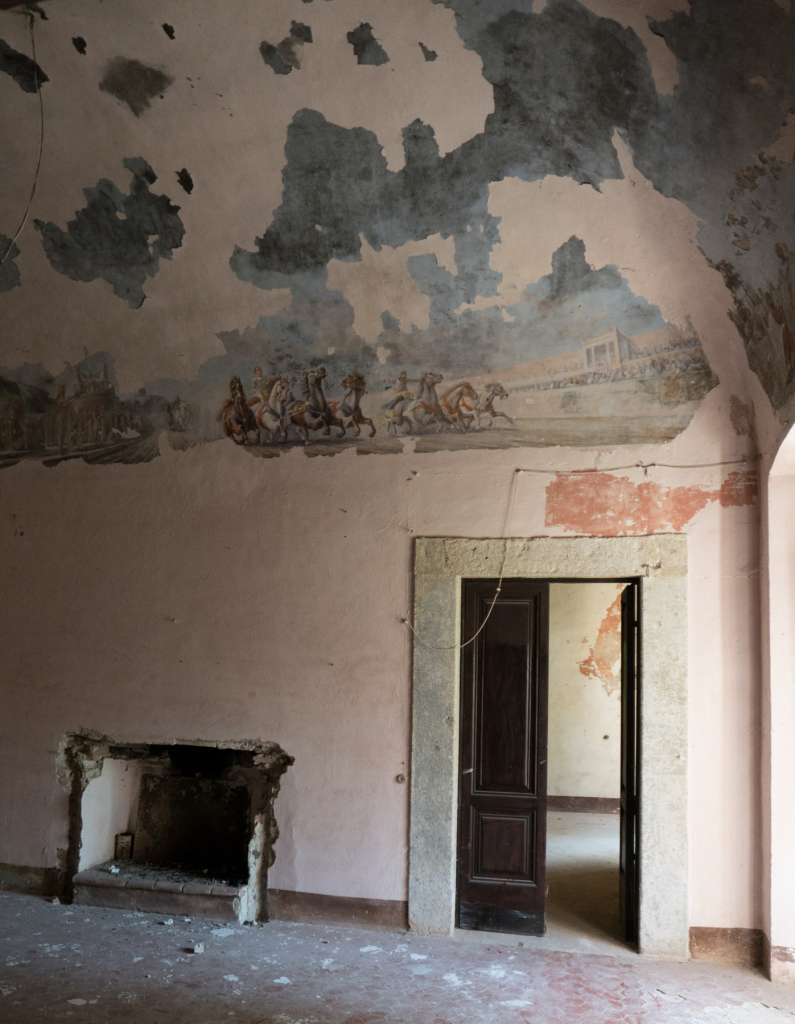 The Popes’ apartment had a fireplace with a chariot race fresco above, and even doors. Did the Medici ever let it to lesser mortals?  After all, only two popes ever stayed here, Pius VI  and Pius VII (no relation). Pius VI is one of the real people who features in De Sade‘s  1797 novel ‘Juliette, or Vice Amply Rewarded‘. His audience with Juliette ends in an orgy involving the pope himself.  The Marquis  also stayed here, could they possibly have met? Napoleon, though notoriously anticlerical himself, imprisoned De Sade for the depravities of the novel for the rest of his life.  Casanova  was also a guest.  And was this the fireplace Dickens described? 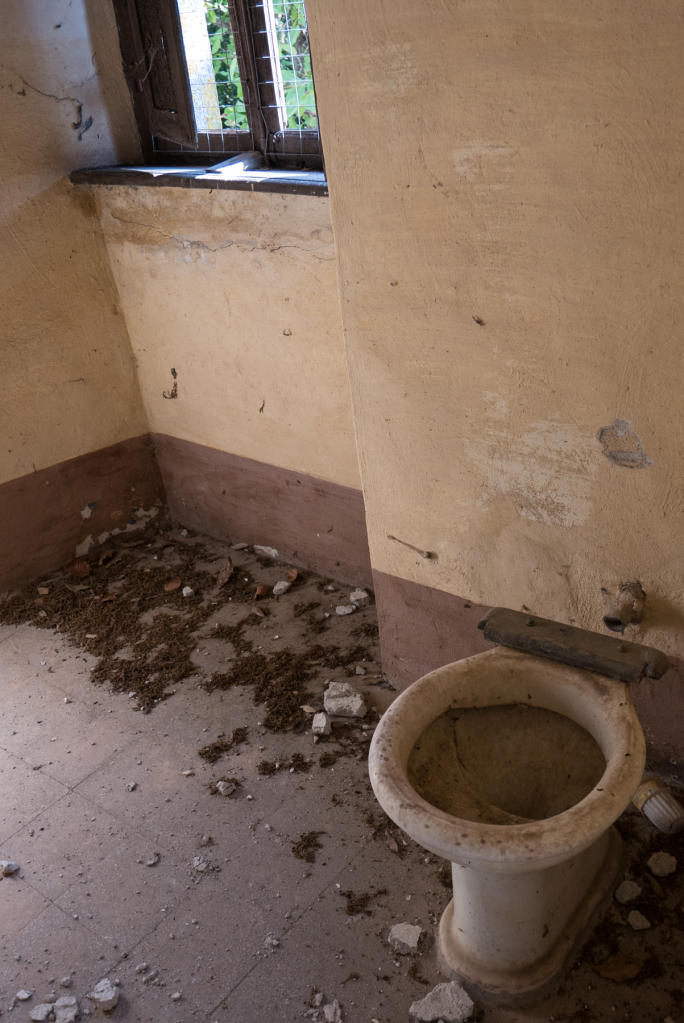 Popes had ‘mod cons’,  even a bathtub 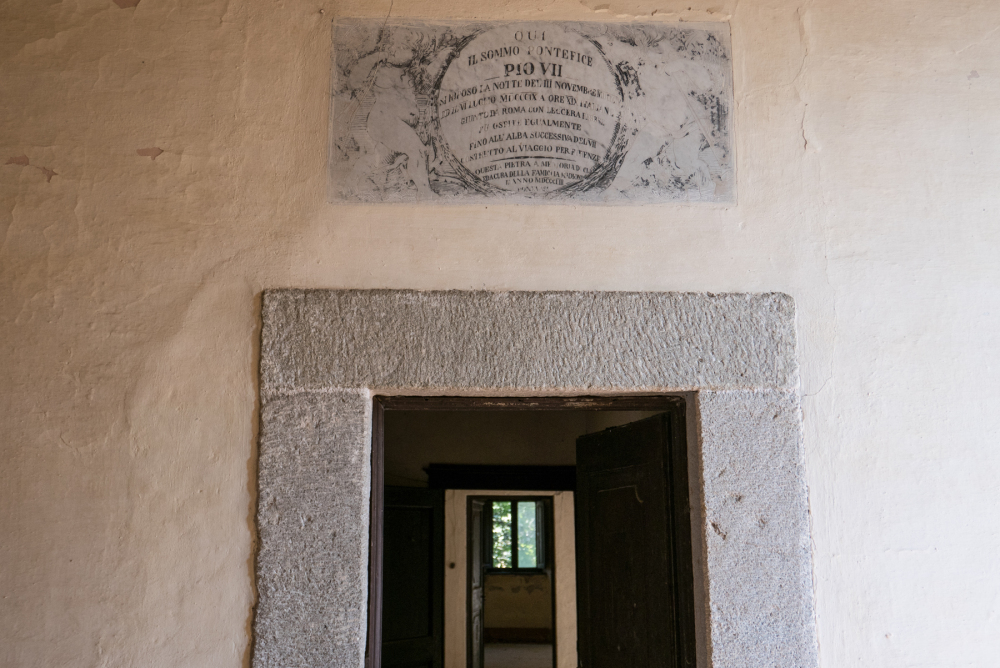 Pope Pius VII passed a night 3rd November 1809 suffering from a light fever on his way as a French prisoner to crown Napoleon in Paris.

The art critic Brian Sewell made an entertaining documentary ‘Brian Sewell’s Grand Tour’ in which he reads from entertaining actual accounts of the ‘milords’ who stayed here. We forget how tough travelling was before the railway age,  even for the wealthy. Later he also visits Orvieto where he makes some amusing comments within the cathedral. Highly recommended, unless you find his voice too much – somebody said, ‘He even makes the Queen sound common.’

Read Part One – Grand Tour: Radicofani on the Cassia – here

Photo Excursion to Castro on our Photography Tour in Italy.