A fallen woman flying on a devil’s back, one of the images by Signorelli that so stimulated Freud

Freud, Orvieto, Signorelli: the Renaissance frescoes by Luca Signorelli had a profound effect upon Freud. In the entrance hall of Freud’s last home in London, on the right, is a picture of Tivoli, a reminder that Italy was his favourite holiday destination and his spiritual home. 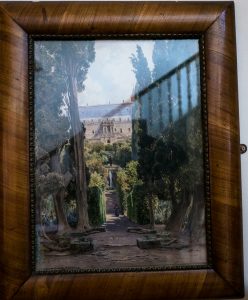 50 years after his death in London a collection of black and white Italian postcards was found in a drawer. Purchased during his first of three visits to Orvieto in 1897 they depict frescoes by Luca Signorelli from the San Brizio Chapel in Orvieto cathedral. His encounter with the Renaissance artist from Cortona had a profound effect upon him that profoundly influenced his life and work.

It was Freud’s interest in sexuality that first brought him to Trieste, now in Italy, but then part of the Austrian Empire in 1876. He was a young research scientist when he came to study one of the burning issues of academia at that time: were eels bisexual hermaphrodites?

When Freud arrived in Orvieto 120 years ago in 1897 he was going through a turbulent period for several reasons: he was mourning his father who had died in December; partly as a result of this he was in the process of jettisoning his conclusion that hysteria was caused by paternal seduction in childhood turning instead towards the idea of infant sexuality; curiously, the man who sought the source of almost everything in sex had recently set out on a life of celibacy after siring six children in nine years.  Furthermore, two years before he had embarked upon self analysis, then an uncharted journey into the unknown, and in 1896 coined the term psychoanalysis. 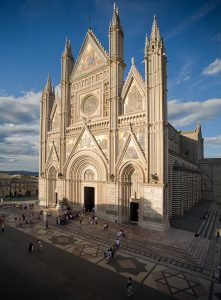 Orvieto Duomo and Stars of David

Freud was an irreligious, unbelieving Jew, but he was not immune to spirituality and maintained a lifelong interest in paganism and mythology.  A Jewish upbringing was not during the 19th century likely to owe much to the visual arts, rather it was intellectual and musical. Though Freud read Shakespeare in English throughout his life he seems to have had no interest in music. His Interpretation of Dreams was, he said, guided by Dante’s Inferno.
This then was the 41 year old man who stepped into the San Brizio chapel in Orvieto cathedral that September day.

The vaulted ceiling was  gorgeously painted by Fra Angelico the Dominican friar in purple and gold in the mid 15th century. He abandoned the project after his favourite assistant fell to his death. 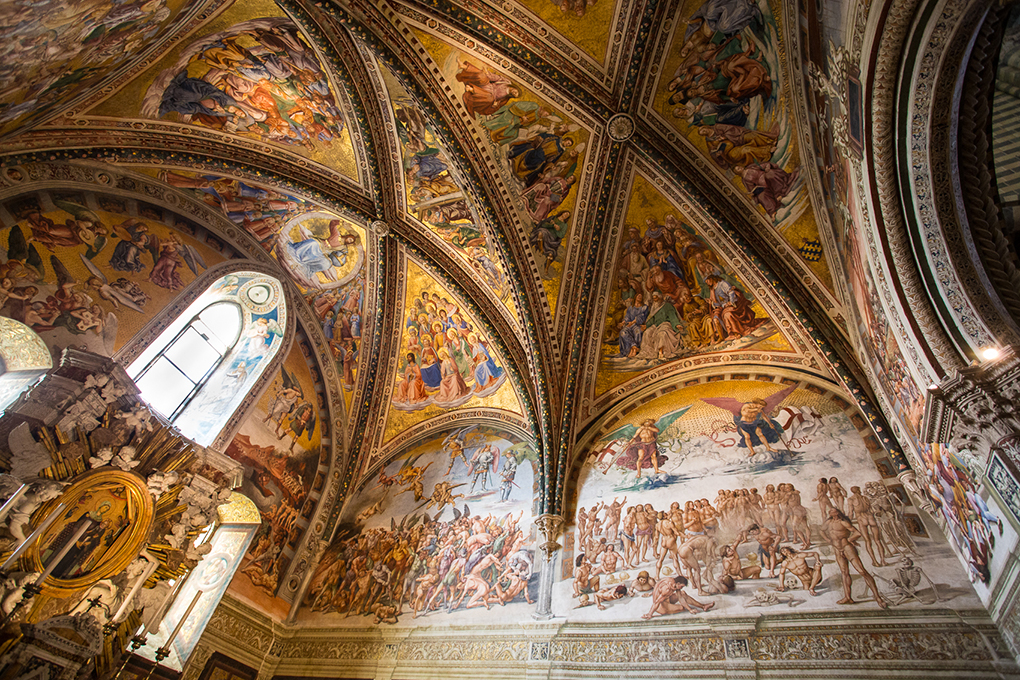 The wonders that Freud saw when he walked into the San Brizio Chapel in Orvieto Cathedral. The Fra Angelico frescoes on the ceiling, the Signorelli on the walls.

The frescoing of the walls was undertaken by Luca Signorelli in 1499 aged about 54. Signorelli’s vision is apocalyptic. 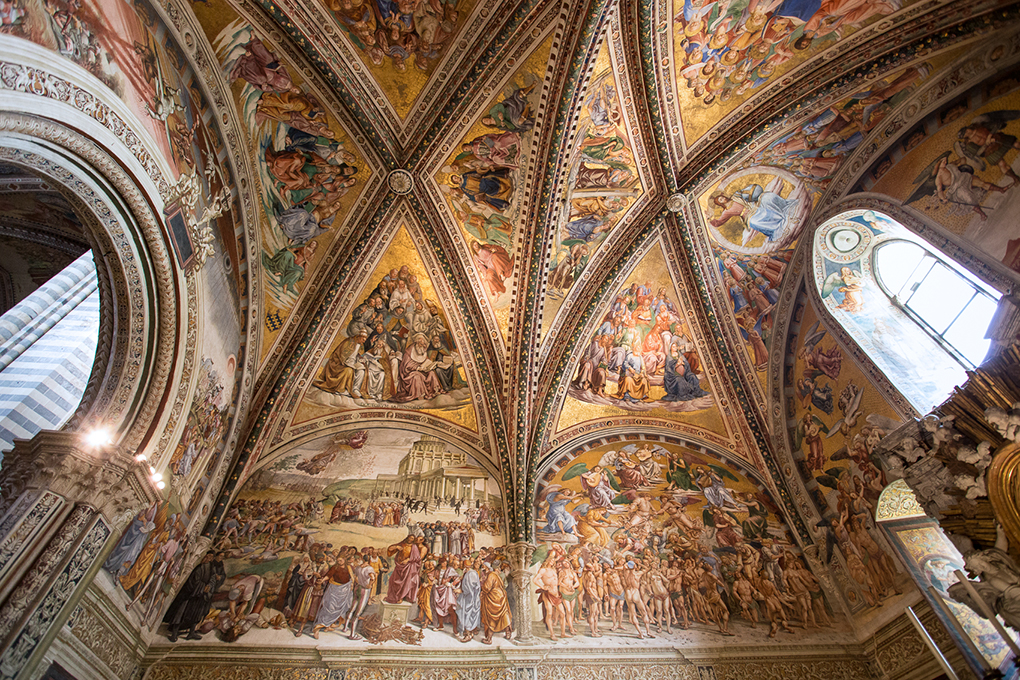 The Antichrist panel left and the Elect in paradise right. Fra Angelico frescoes above on the vaulted ceiling.

On the left is the preaching of the Antichrist followed by the elect cavorting, largely naked, in paradise.

Antichrist left and the Elect in Paradise right. Bottom left corner are Signorelli himself left with hat and Fra Angelico behind, both in black. 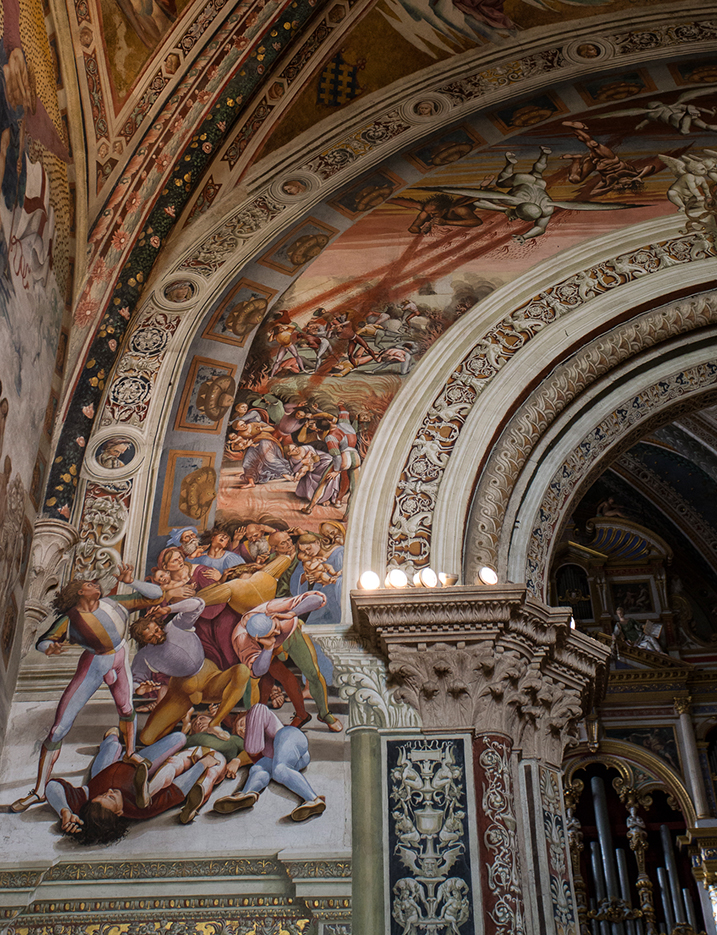 the wicked smitten by death rays from on high

On the wall opposite are two tableau, both a riot of eroticism and naked flesh, not perhaps what what one would expect in a church, the damned thrown into inferno by devils followed by the saved hauling themselves up from their graves to eternal life. 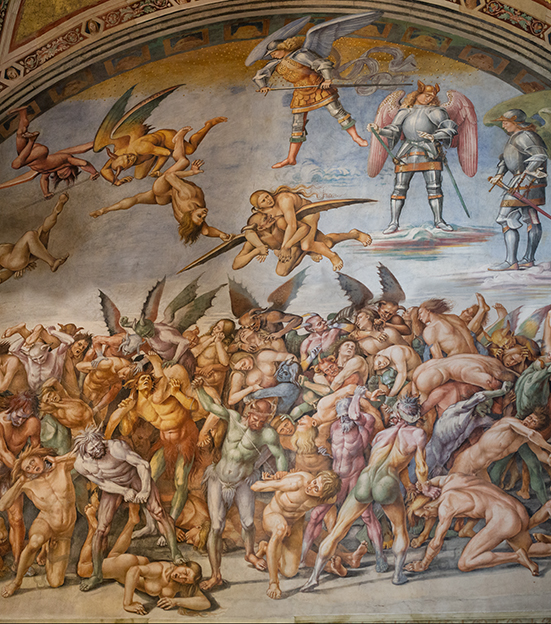 The damned thrown into hell. 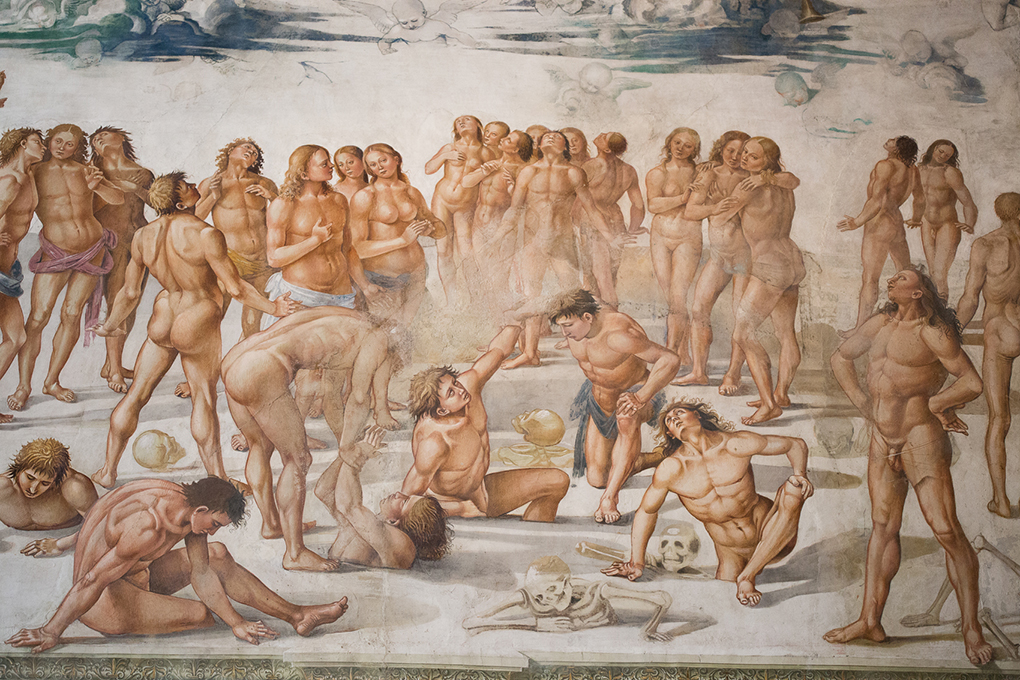 The resurrection of the dead

The tableau that seems to have exerted the greatest fascination upon Freud is the Antichrist. An unusual subject, it was commissioned by the powerful Monaldeschi, a Guelf family, always close to the papacy and in opposition to the Ghibellines who supported the Emperor; the scene is a polemic against heresy, especially the Cathars who had been particularly bothersome in Orvieto, but also against Jews. 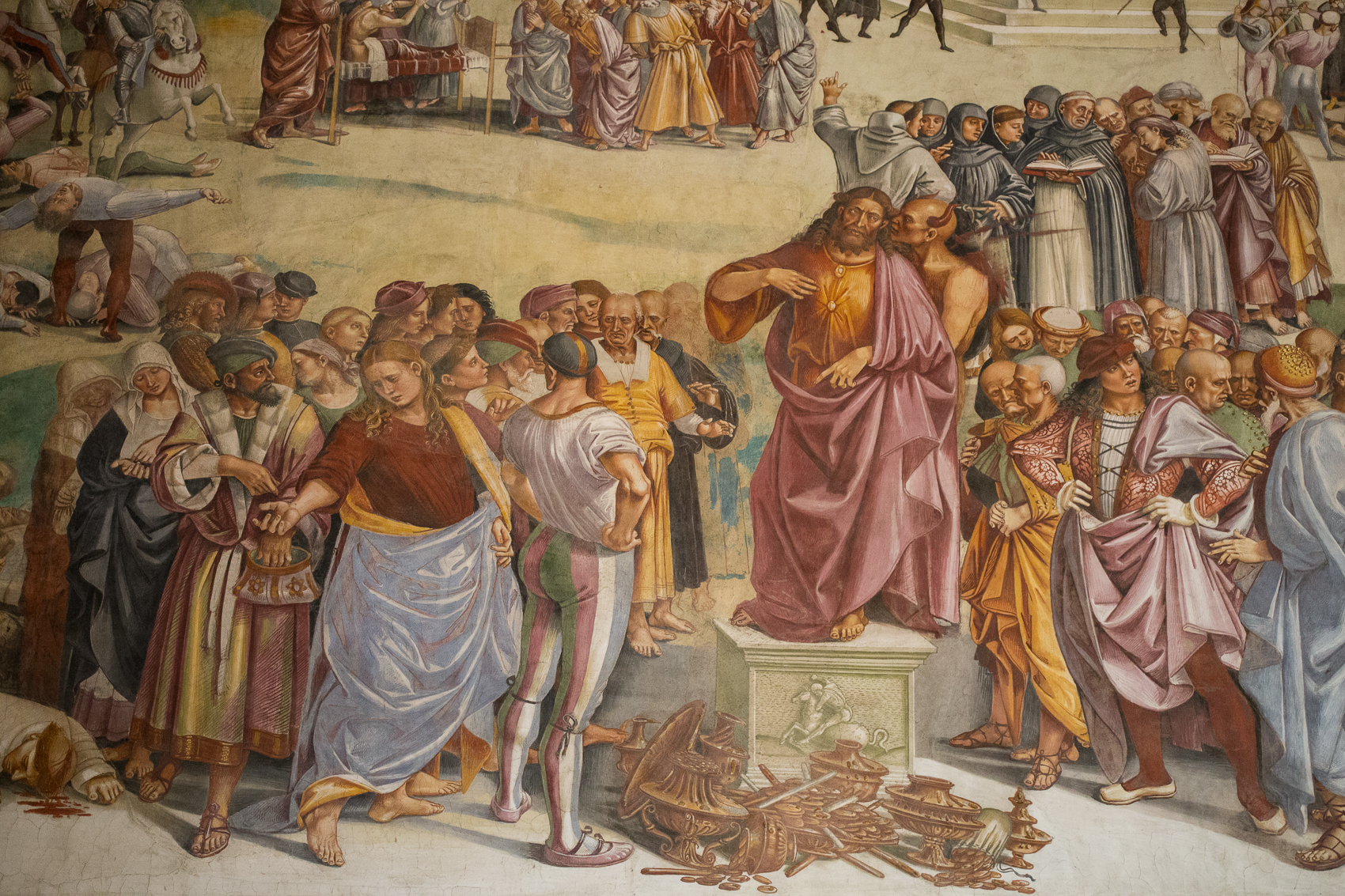 The devil whispers to Antichrist, probably based on Savonarola. On left the usurious Jew bribes a blonde.

Freud was sensitive to increasing antisemitism in the Empire and would have noticed the swarthy figure in the centre foreground handing money to a well dressed blonde woman, he is the usurious Jew.

Freud had been aware of antisemitism since his childhood in Moravia when his father had told his young son that he had humbly turned the other cheek when accosted by an aggressive antisemite on the street. Ever since, Freud had admired more martial father-figures like Cromwell, Hannibal and significantly, Moses. 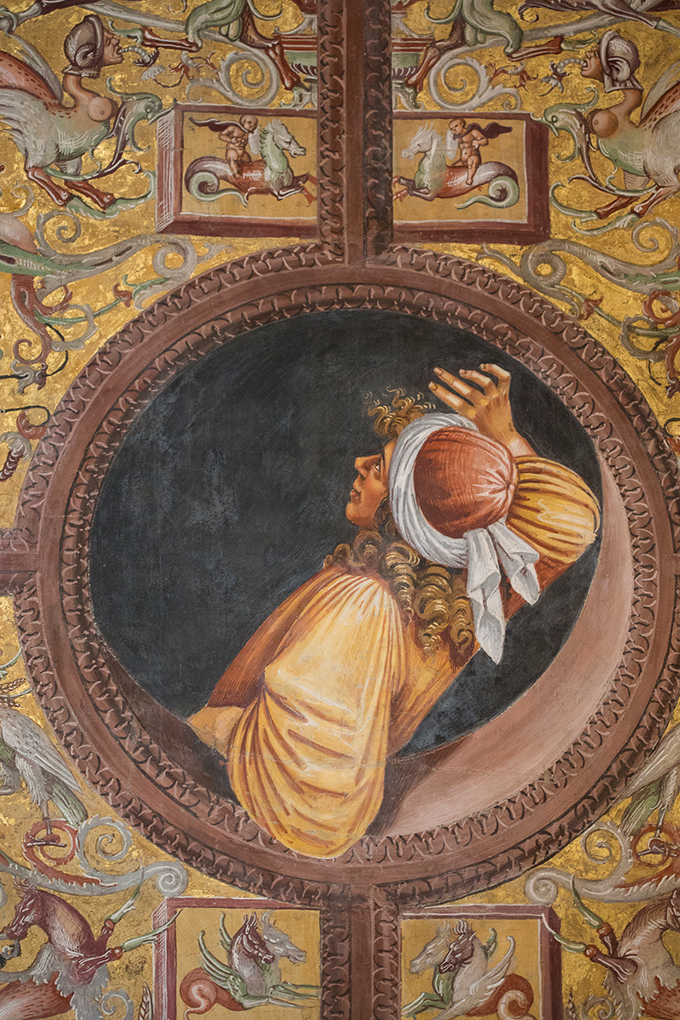 A spectator watches the mayhem above. He is surrounded by ‘grotesques’, painted just after the recent discovery of the grottoes of Nero’s Domus Aurea in Rome.

The Catholic Church at the time saw Jews not merely as infidels, but Jesus-killing heretics. Freud, who was suffering emotional and intellectual turmoil after his father’s death, stood surrounded by Signorelli’s apocalyptic maelstrom and saw the son, Christ, effectively slaying the father, Judaism. 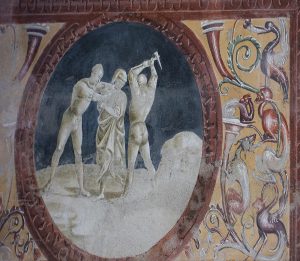 Freud was a year later to famously forget Signorelli’s name, but never the images. His encounter with Signorelli in Orvieto was to lead to the development of his theory of Parapraxis, the psychology of forgetting, the Freudian Lapse.
Freud repeatedly stated that artists and writers got there first, had effectively prefigured the discoveries of psychoanalysis.

“I saw before my eyes with especial sharpness, the artist’s self portrait next to his predecessor in the work…” 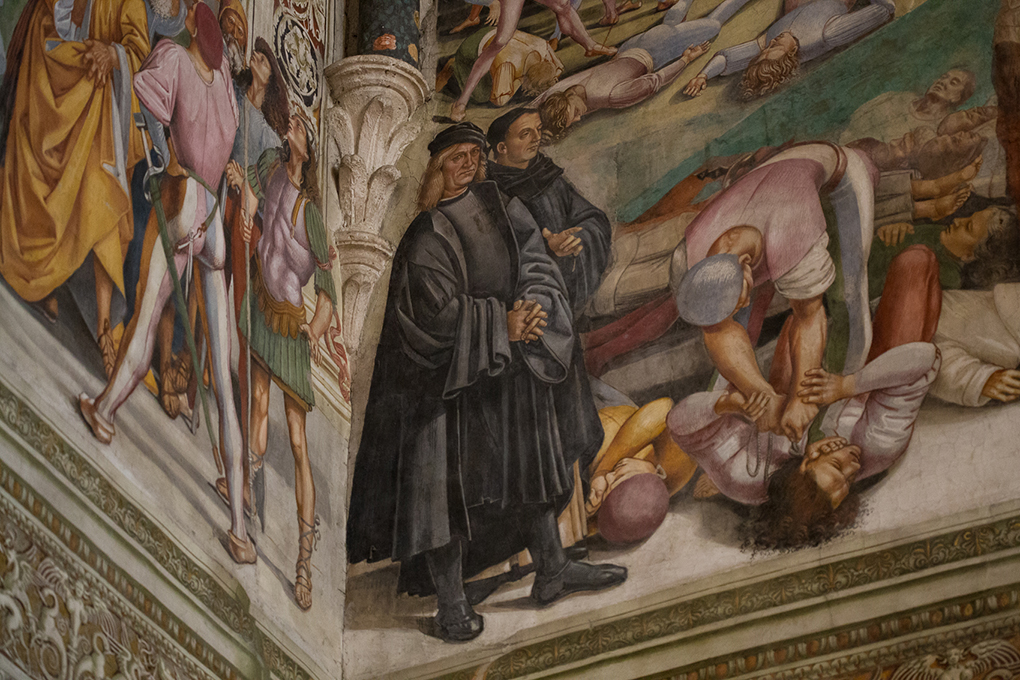 Self-portrait of Luca Signorelli surrounded by mayhem looks out of the frame. Behind him stands Fra Angelico or perhaps not – it could be the Archdeacon.

The artist almost by definition is in touch with his subconscious and that is what Freud saw as he looked up at Signorelli’s creation, a realisation of the subconscious. The unconscious has no conception of time, and as Freud said, ” None believes in his own death. In the unconscious everyone is convinced of his own immortality.”
And while Freud looks up, Luca Signorelli looks down, on him and us.
(final part will follow)

A Tale of Three Cities – Part 1

One comment on “A Tale of Three Cities – Part 2”