A photography workshop in Italy could not  be based in a more appealing place than Ovieto, the most beautiful hill town in all Italy. It stands on its high rock plateau in Umbria, on the borders of both Tuscany and Latium.

Orvieto is an ancient city going back to pre-Roman Etruscan times, on the top of a volcanic rock surrounded by hills covered with vines and olives, and in the distance the snow topped high Apennines. It is noted for its wines, especially the Orvieto Classico. 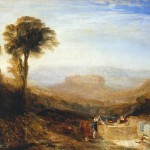 Orvieto which is supremely picturesque, was sketched from many angles by William Turner who spent some time in the area.  The painting itself was done in Rome and is as one would expect somewhat romanticised. Patrick Nicholas has planted an umbrella pine near the spot of Turner’s pine – it should be mature in about 30 years.  His sketchbooks along with the painting are in the Tate, London. You can see them here

For a city with a population of less than 20,000 Orvieto seems a very grand place. This is because it was used by the pope and his court in times of trouble and enriched with very grand palazzi by the aristocracy.
Less than an hour from Rome, it is a bustling place full of street cafés, restaurants for most tastes and pockets and smart shops frequented by equally smart, good looking Italians – there are a few scruffy tourists as well. The centre is largely pedestrianised and there is not a single traffic light in the entire city. 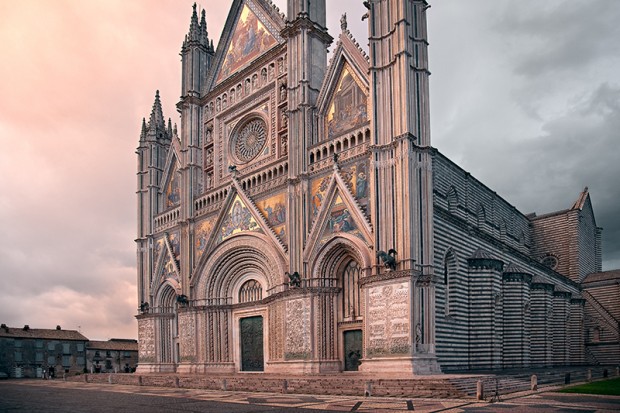 Orvieto is best known for its mediaeval cathedral, the finest gothic cathedral in Italy dating from 1263. The facade of the cathedral is quite unique with mediaeval bas-reliefs, bronze sculpture and fine mosaics which glow in the evening sun. The sides are an austere black and white stone similar to the duomo of Siena.The Brizio Chapel within is an inspiration to artists and photographers with a ceiling by Fra Angelico and an unrivalled series of frescoes by Signorelli  which inspired Michelangelo when he passed by here before beginning the Sistine Chapel.
Italians know Orvieto for its famous well, the well of St Patrick. Constructed in 1537 with a double helix of 248 steps so that the donkey going down did not meet the donkey coming up. It is a masterpiece of Renaissance engineering by Antonio Sangallo. 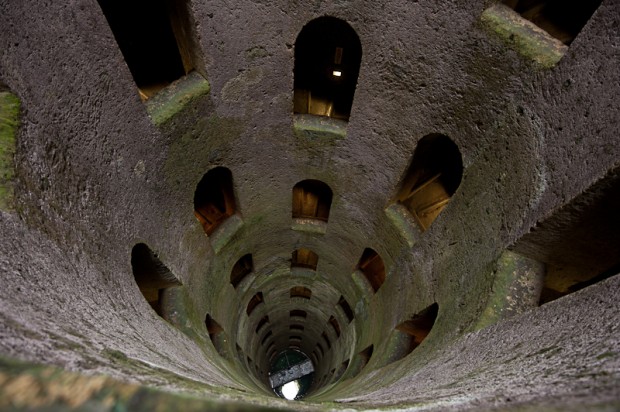 The well is a perfect place to practise photography under low light conditions with a broad contrast ranging from the bright sunlight pouring down the shaft and the gloom of the stair well.

Orvieto is girded by city walls, fortresses, towers and gatehouses. You can walk the entire circumference below the walls on an easy, well made path in a little over an hour – there are stunning views across the Umbrian countryside towards the Appenines and the golden hills of Tuscany a mere 20km away. You will also come across Etruscan cemeteries including the unique Cimitero del Crocifisso with its streets of curious tombs built of Tufa stone to resemble the wooden houses of the Etruscans – an eerie place on a foggy morning in April or October. 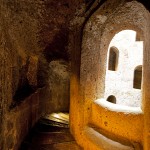 Orvieto is famous too for its festivals. In winter over New Year’s there is the world renowned Umbria Jazz festival; in August the Umbria Folk Festival and in June the colourful pageant of the Corpus Domini when the townsfolk parade  through the streets for two days in June dressed in Mediaeval costume.

For those who love markets there are two a week on Thursdays and Saturdays in Piazza del Popolo.
You couldn’t find a more attractive town to enjoy yourself in when taking time off from a photography course or to relax in after a day long photo excursion.