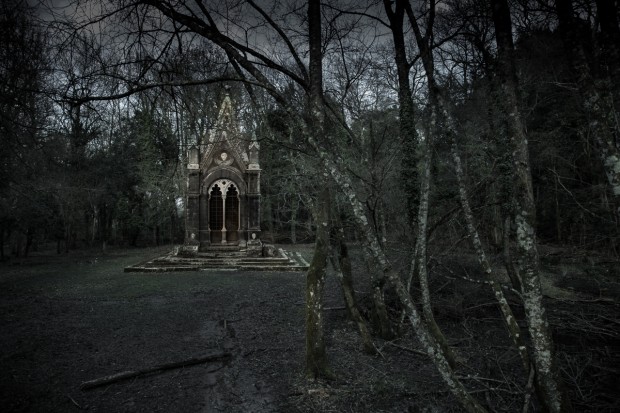 Near Orvieto on a ridge looking over a deep valley into Southern Tuscany stands a sinister looking castle in the mock-Gothic style of the late nineteenth century. It once belonged to the immensely rich Cahen family, still remembered in Orvieto where a square is named after them. The castle was intended to be the country home of Conte Edoardo Cahen and his beautiful Anglo-Greek wife Christine, but neither of them were ever to live there. Now Castle Cahen in Torre Alfina is uninhabited. 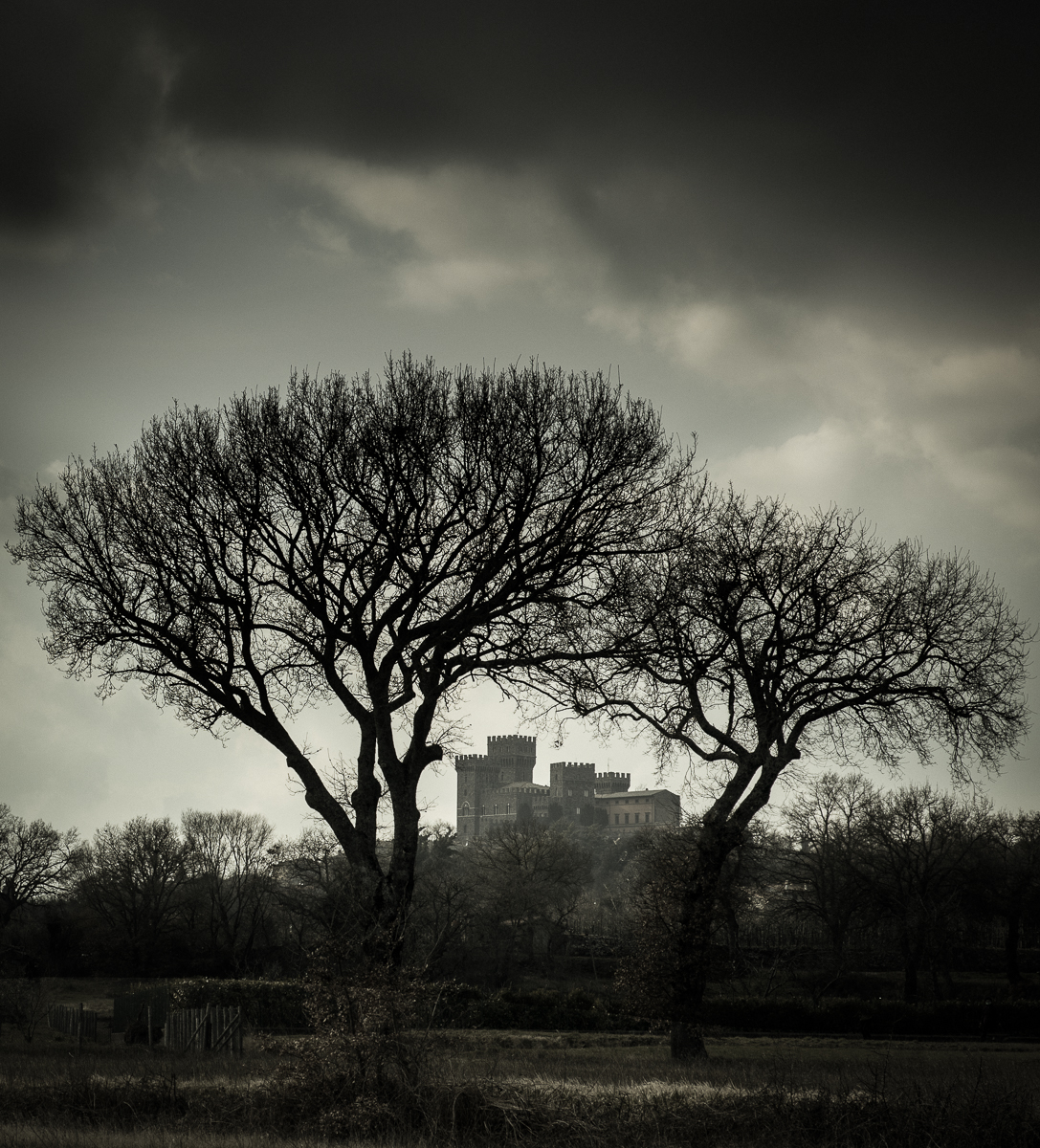 Edoardo Cahen, scion of the Cahens d’Anvers, belonged to the cosmopolitan Jewish European aristocracy – akin to royalty but with a lot more cash – that moved effortlessly from one country to another, spoke several languages fluently, had branches of the same family in several capitals, and having made their fortunes in banking, commerce and insurance were happy to devote themselves to cultural pursuits rather than huntin’, shootin and fishin’ which were the most common pastimes amongst the older established aristocracies around Europe. The Cahens d’Anvers,  became rich through the novel idea of using the pigeon post between Antwerp and Amsterdam to steal a march on their stock market rivals. 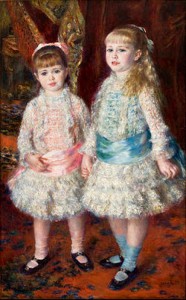 Alice (L) and Elisabeth Cahen (R) by Renoir. Elisabeth was murdered in Auschwitz.

Edoardo’s three nieces were painted by Renoir. However, his brother Louis disliked the painting of Alice and Elisabeth so much it was hung in the servant’s quarters; what is more he quibbled and stalled over paying the bill, 1,500 francs (about 10-15,000 Euros today), arousing a previously un-manifested anti-Semitism in the artist. The Cahens may have been notable patrons of the arts, but this incident perhaps demonstrates that their taste was possibly rather arriviste.

Irène’s daughter Béatrice along with her husband and two young children died in Auschwitz as did her sister Elisabeth and other members of the family. The painting became part of Herman Göring’s illicit collection.

Edoardo’s father Joseph Mayer Cahen d’Anvers had lent considerable funds to finance the Risorgimento, the unification of Italy, and a grateful nation bestowed upon him the title of Conte. The influence of capital on the fate of nations is often underestimated. Edoardo Cahen then developed a large area of Rome, even before it became the capital of Italy, near the Vatican an area that was to be known as Prati.

After these exertions he decided to retire with his wife to a tumbledown castle near Orvieto in the wilds of Umbria. She was Christine Spartali the younger of two highly educated and beautiful sisters who moved in the artistic beau-monde of 1860s London. Christine was considered by the Pre-Raphaelites, ‘one of the most beautiful women of her generation’. Indeed the poet Algernon Swinburne was so smitten he exclaimed, ‘She is so beautiful I feel as if I could sit down and cry.’ It has to be said however that he was quite wont to weeping. 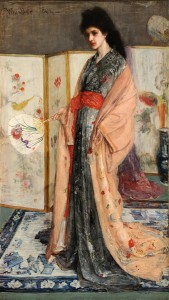 Marie Spartali had been painted by Rossetti  and went on to become a notable professional painter for the rest of her long life, whilst Christine modelled for Whistler in 1864 – she was the ‘Principesse du Pays de la Porcellaine’ his most famous painting. She was photographed by the most famous portrait photographer of her day, Julia Margaret Cameron sometime between 1865 and 70 probably in the Isle of White where they were neighbours. Whereas there are scores of photos by Cameron of Marie, there is only one of Christine.  Exposures were long in those days so it was hard to manifest unbridled joy, but there is no denying that she has a more than usual Pre-Raphelite mournfulness about her.

The long exposures required by Cameron’s photography were as of nought compared with posing for Whistler: twice a week for 6 months till eventually Christine fell ill and had to be replaced with a stand-in to finish the picture. Besides the Whistler picture (which Spartali père did not like and refused to purchase) many of Marie Spartali’s paintings of typically Pre-Raphaelite subjects seem to portray her younger sister. This obsessive interest in one model was common amongst the Pre-Raphaelites. 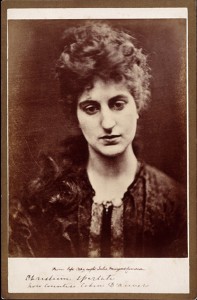 Both Spartali girls were exceptionally tall (Marie was 190cm) and highly educated, but whereas the elder sister studied painting under Ford Maddox Brown and became a noted painter for the rest of her long life, Christine never pursued a career. Marie fascinated Edward Burne Jones who portrayed her in his Cupid Delivering Psyche – in both male and female roles; he was known for his exotic sexual tastes.

Christine married Cahen in 1869 in Chelsea despite the opposition of her Greek orthodox father, the Greek consul general in London. How did they meet? Did Cahen move in the arty world of the Pre-Raphaelites and their like? We have no picture of him and I cannot find any account of his time in London. 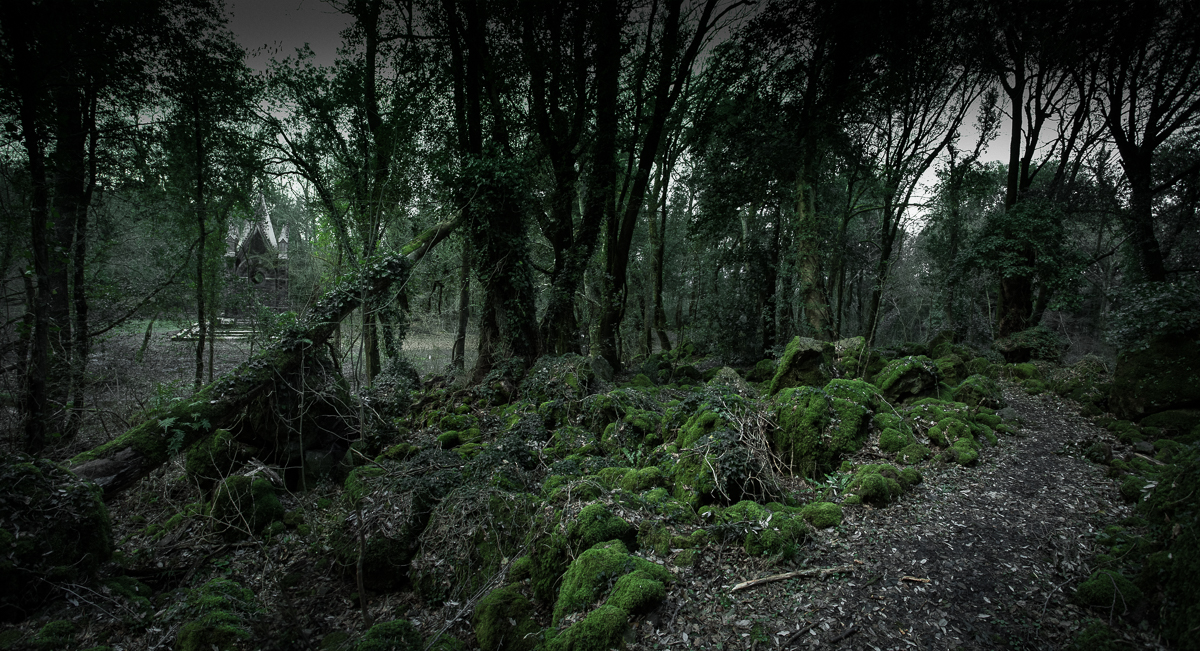 Path leading to the Cahen mausoleum through The Sasseto wood

At first they had enjoyed the cosmopolitan life in Naples, Rome and Paris where their 2 boys were born, but it seems in Rome the marriage began to go wrong and by 1880 she was attempting – unsuccessfully – to divorce Cahen. Her health deteriorated, possibly owing to the depressing prospect of a chatelaine’s life in darkest Umbria, but at least this illness brought about a partial reconciliation with her father. She took to chloral hydrate and alcohol. According to Rossetti’s brother Michael she died miserable and alone in Tirol of catalepsy in 1884, though it is more likely that the chloral carried her off aged just 37.

Edoardo Cahen, lover of Greco Roman art, took the bizarre decision to build himself a mock gothic mausoleum which would not have looked out of place in Highgate Cemetery.

Cahen bought Torre Alfina in 1881, but it took 20 years to make it truly habitable by which time Cahen and his wife were both dead and there was practically nothing left of the original mediaeval building – what we see today is a mock gothic pile. 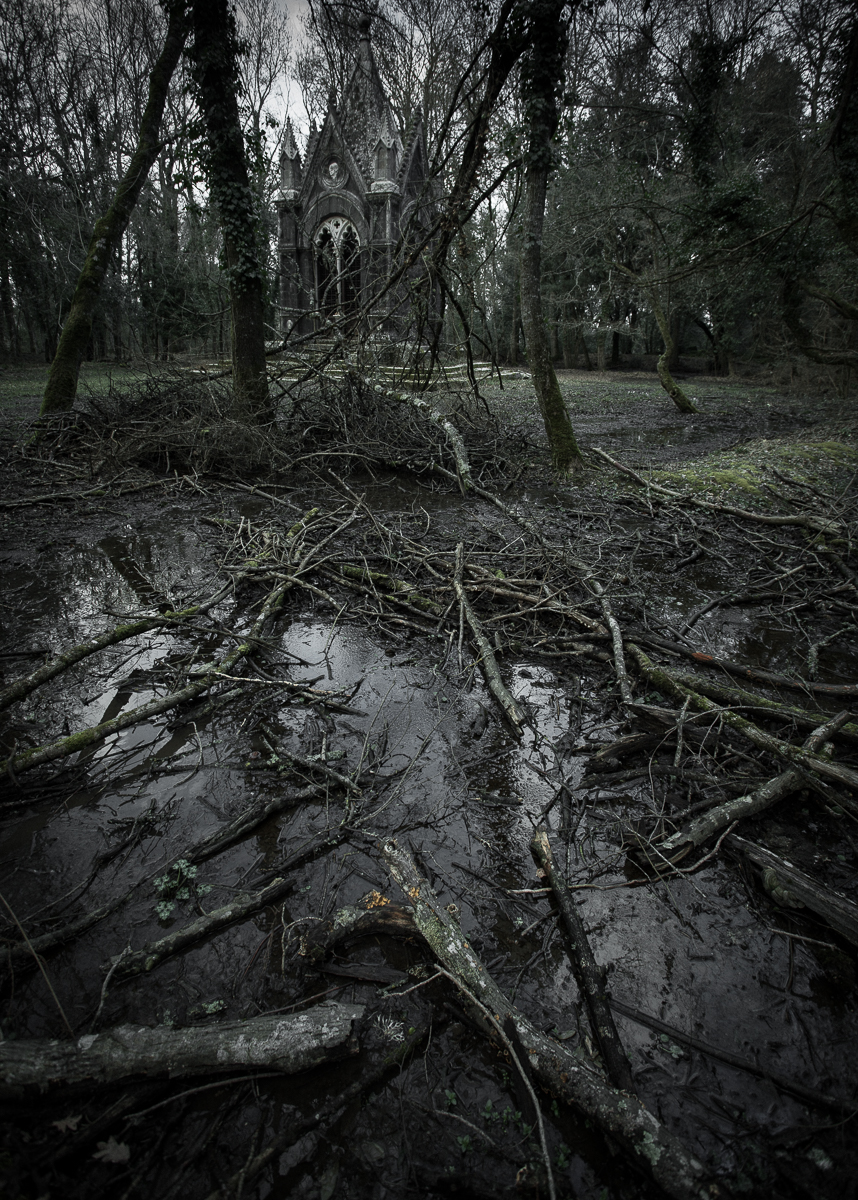 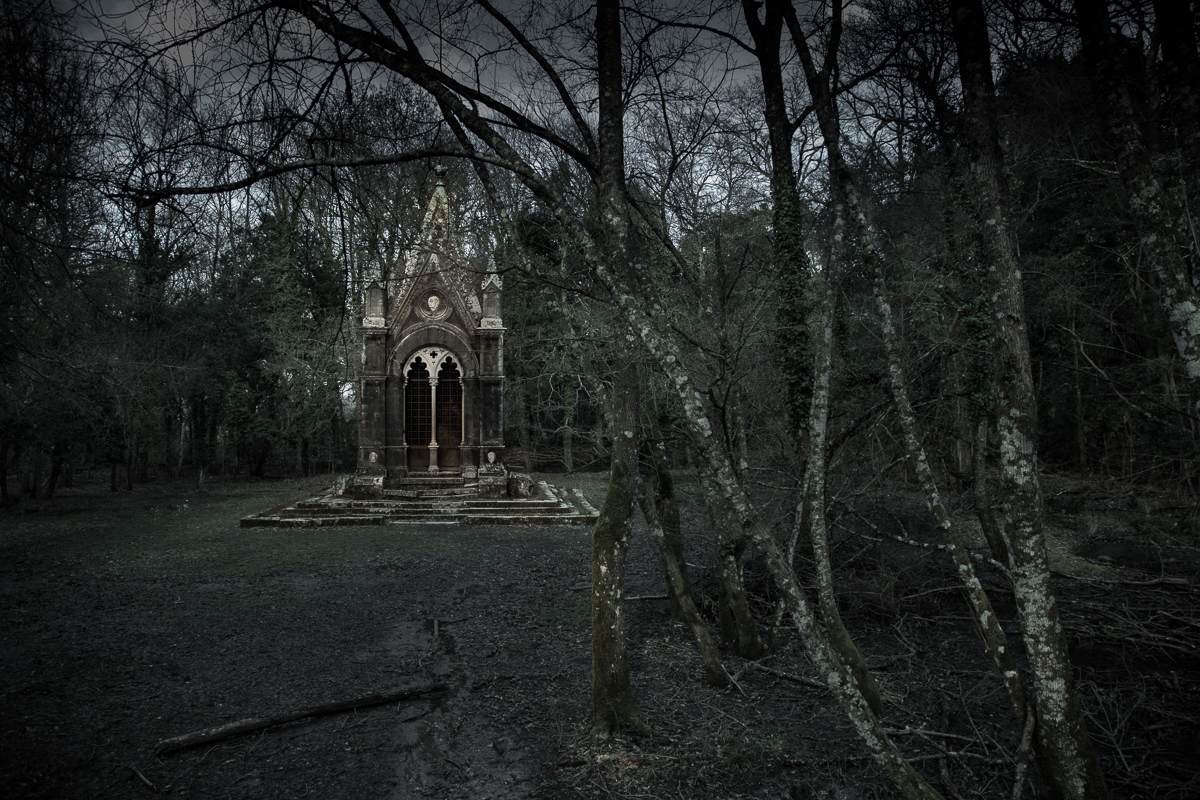 Rather like the fictional Moisè Finzi-Contini who built a monstrous sepulchre looking like a set from Aida that all Ferrara’s Jewish community found absurd, Edoardo Cahen lover of Greco Roman art took the bizarre decision to build himself a mock gothic mausoleum which would not have looked out of place in Highgate Cemetery (where incidentally Rossetti’s wife Elizabeth Sidall is buried).

It lies in the forest a kilometre or so below the mock Gothic castle which he never lived to see completed – he died in 1894 aged 62. 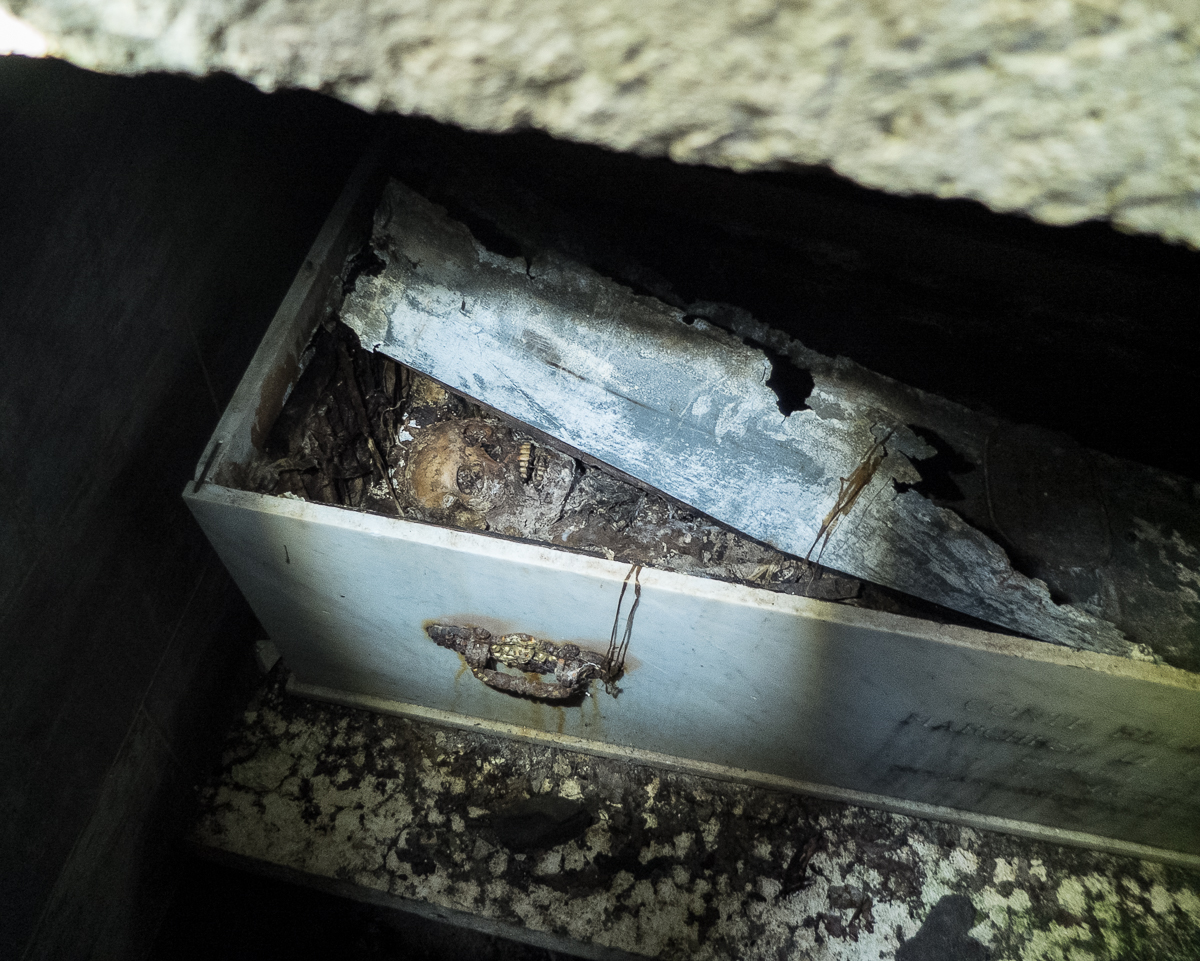 His body was embalmed by the Vatican’s own undertaker; his coffin placed on the top shelf in a vault designed to host generations of Cahens, it lies alone. For some reason the sons never brought their mother’s remains to the vault and the whereabouts of her grave is unknown. 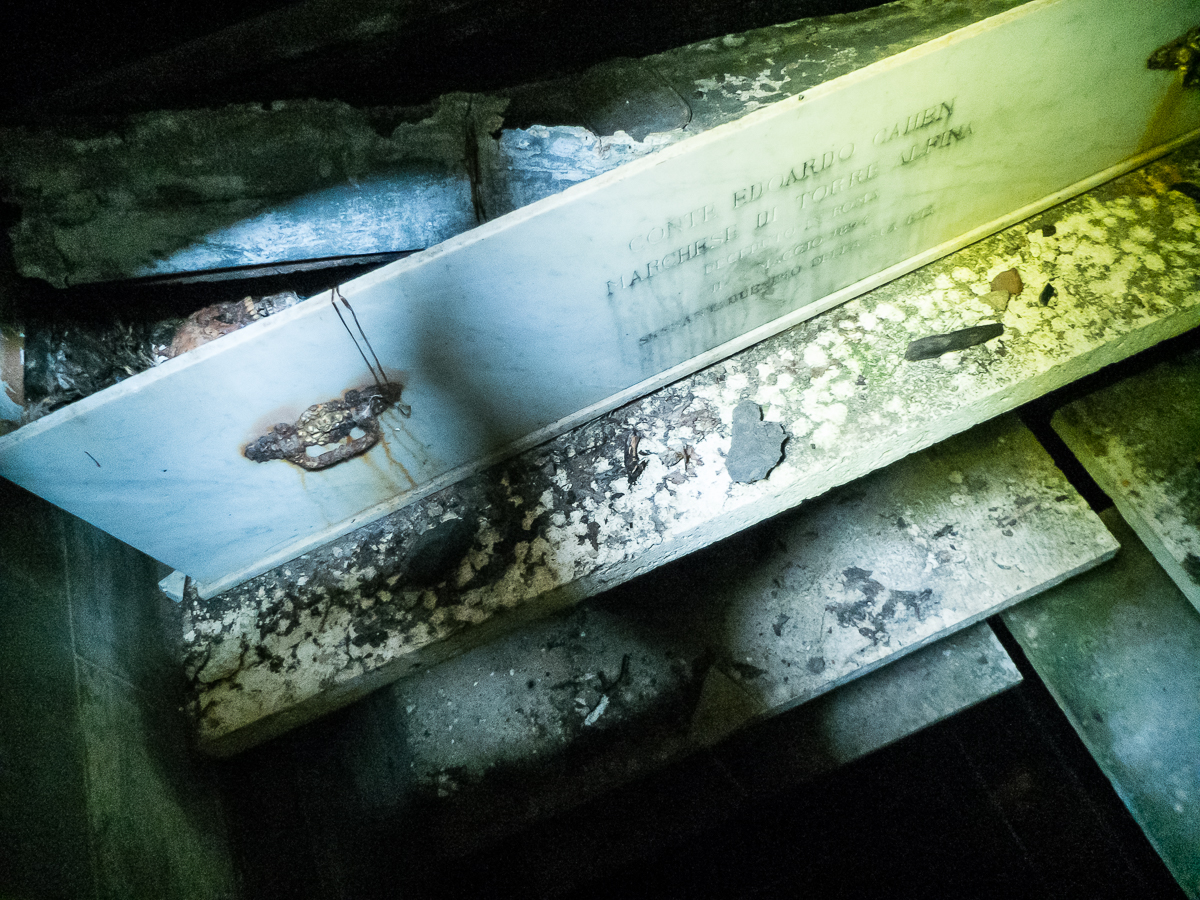 Edoardo Cahen’s coffin amongst empty shelves in the Mausoleum

The Writing on the Wall

The two Cahen sons left Italy following The Racial Manifesto of 1938 when Jews were stripped of their citizenship, barred from the professions, excluded from banking, education and the civil service; they were also liable to have their property confiscated. Italian Jewry had been emancipated during the process of the unification of Italy between 1860 and 1870, but now Mussolini determined to cement the Berlin Rome Axis by bringing Italian racial laws into line with Germany’s. 6,000 Jews emigrated 1938-1943. Of those that stayed something over 6,000  perished out of a pre-1938 population of  46,500. 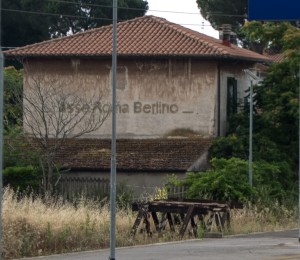 In 1943-4 the castle was used by the Germans as a command centre and suffered bomb damage as a result. The contents were auctioned off in 1969. Neither Cahen sons had children.

During wartime the mausoleum sacrificed its iron railings and recently the tomb was broken into, the grave stone smashed, the coffin desecrated.

The castle until recently belonged to an absentee landlord, the uncouth, corpulent, criminal bankrupt, Luciano Gaucci who starting from humble beginnings with a cleaning business in Rome, graduated to money laundering on a grand scale and onto wholesale corruption in the football business. He lists his enthusiasms as sex, horses and football.

The castle is now in the hands of a trust and is visitable.

For those who have a taste for the sinister, we can include in our tour of places to photograph in Tuscany, the creepy Castle Cahen and its mock Gothic tomb in the woods.