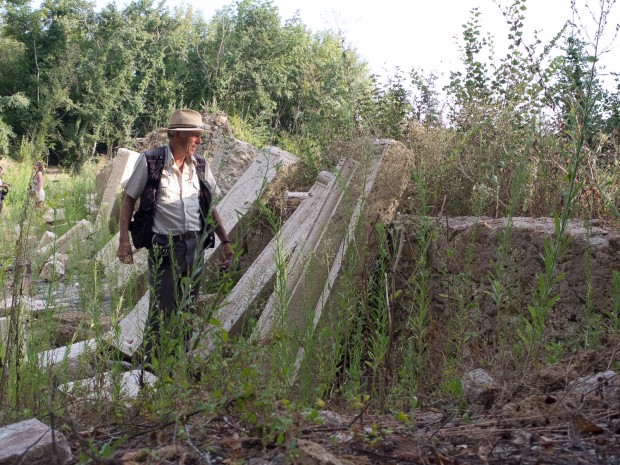 An Off-the-beaten-track photography tour to the ruined city of Castro. Destroyed by the Pope in 1649, Castro was given the epithet The Carthage of the Maremma and today it could be defined as the Renaissance Pompeii.

In April 2015 we went on a photo tour to the ruined city of Castro.

Castro before destruction painted around 1567

415 years ago a city in Central Italy the capital of the Duchy of Castro was totally destroyed, not by earthquake or flood, but by the Pope himself egged on by his sister in law who had a pernicious influence over him. The malevolent female appears to have been motivated by solely by personal spite against her erstwhile neighbours the Farnese family. 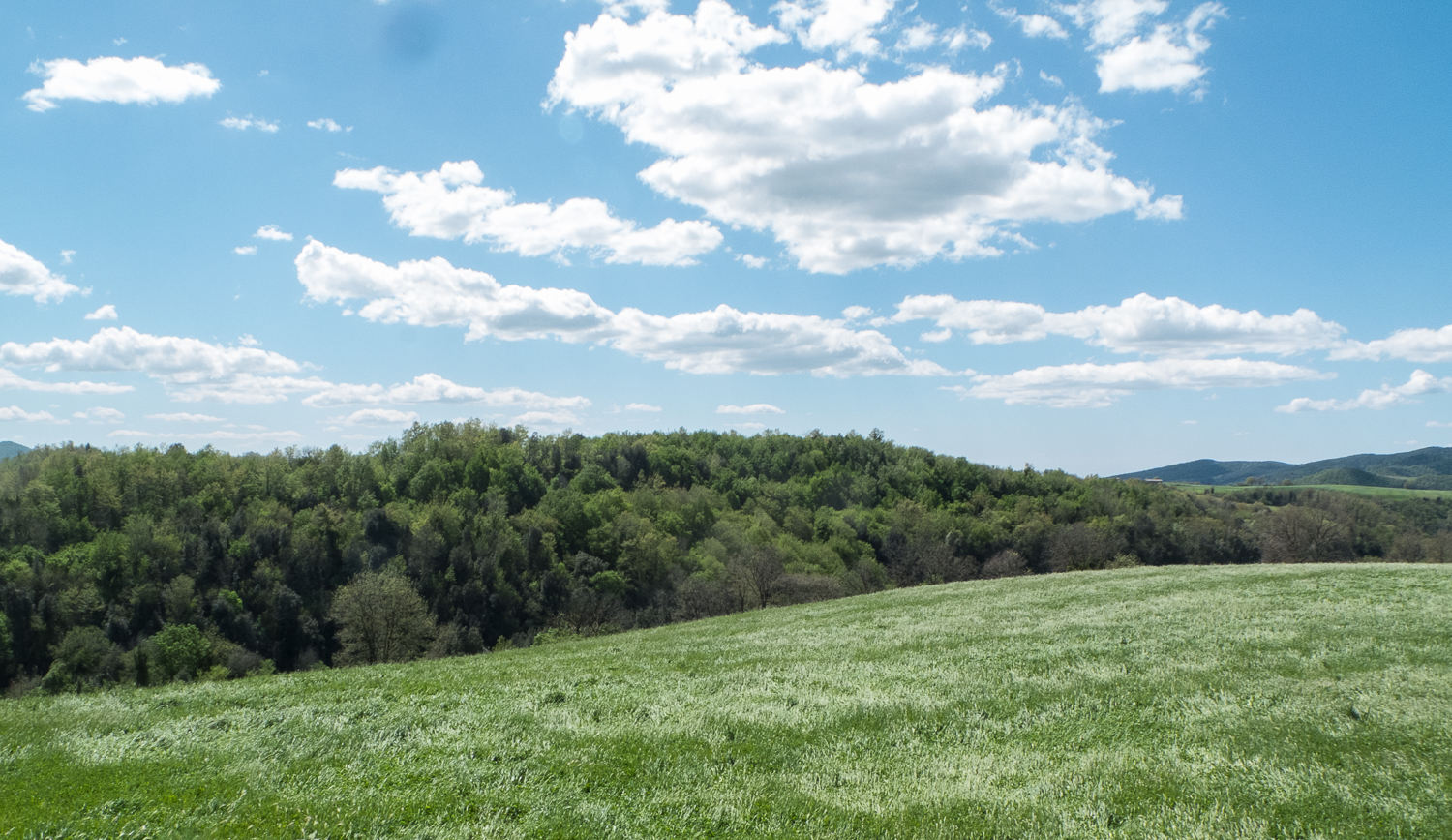 Castro as it is now just a wooded hill. From here cannon bombarded the city in 1649

Nowadays it seems as though the world is going from bad to worse, but perhaps we just have to admit it is just the usual cycle of civilisation being assaulted from without and within by barbarism; after all 25 years ago we still had the Berlin Wall and the constant threat of nuclear war; 70 years ago the Second World War was drawing to a close, but hundreds of thousands were still to die in the last months; a hundred years ago the Armenian genocide began in the Ottoman Empire, and Italy despite observing the blood letting in France, Belgium, Gallipoli and Russia stood poised to enter the war against its erstwhile ally Austria in May 1915. 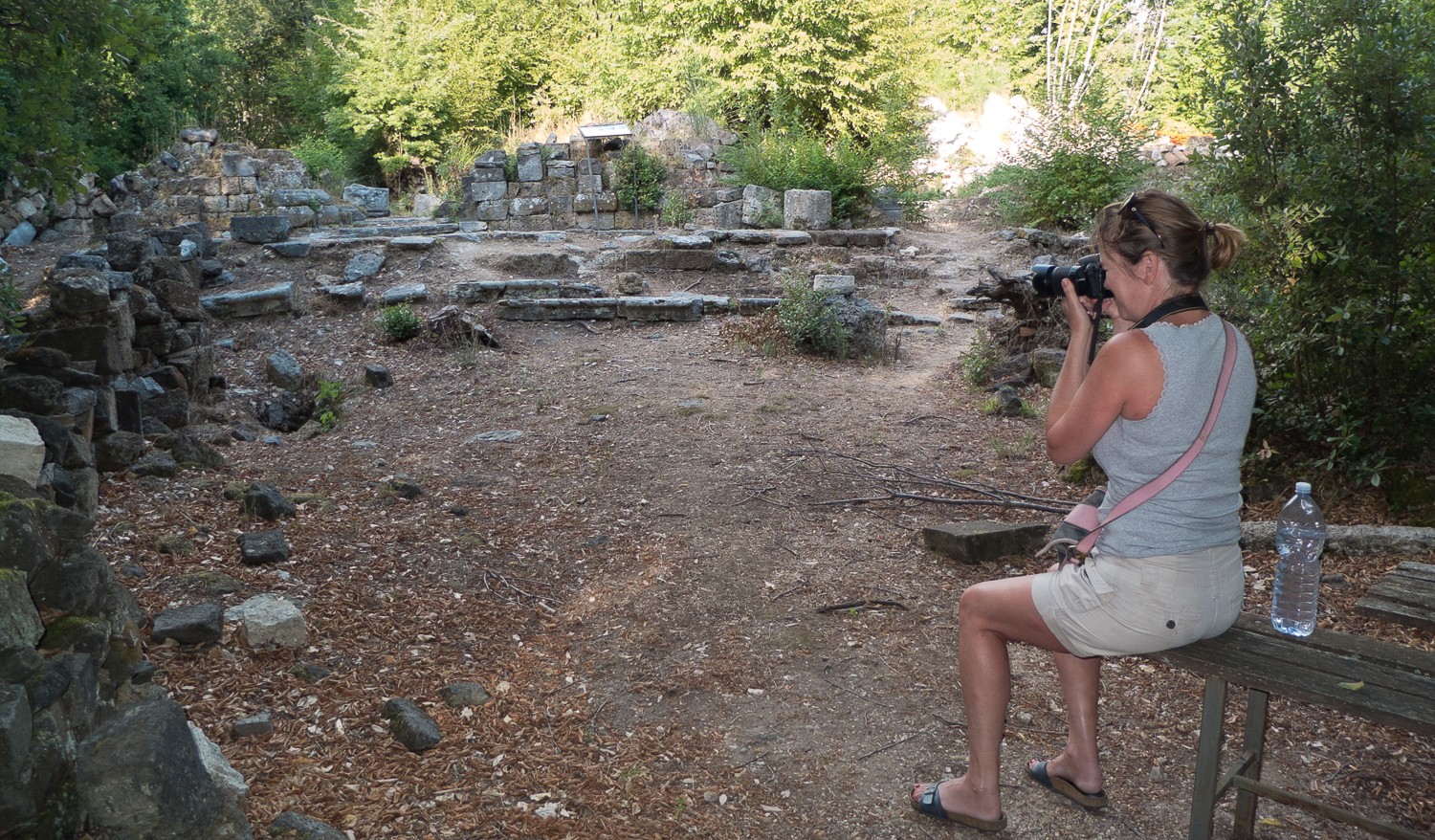 However, things in the mid 17th century were almost as bad with unusually cold winters, caused by decreased sunspot activity and meteor showers resulting in famine all over the world, and widespread wars. Bellicosity is usually attributed to men, but in 1649 a fearsome Italian female was to cause grievous harm purely out of spite. Donna Olimpia Maidalchini was the sister in law of Pope Doria Pamphilj, Innocent X . Venal, mean, unscrupulous, felonious and avaricious as it was conceivable to be, yet she somehow insinuated herself into the Pope’s confidence and possibly his bed as well. 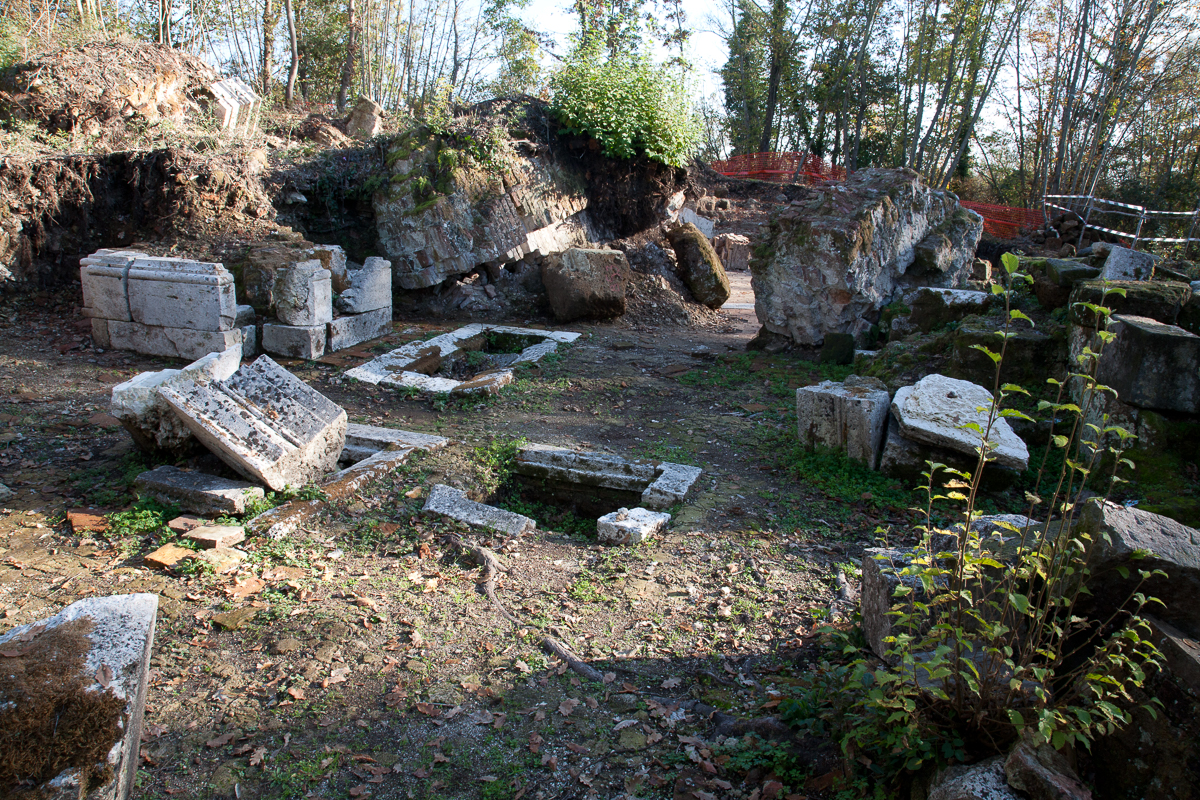 San Savino church, open charnel chambers in the foreground still containing the bones of the forbears of Castro

She was particularly antagonistic towards the powerful Farnese family. She convinced the Pope to initiate a dispute over the placement of a bishop to the Dukedom of Castro, the Farnese seat. The luckless bishop was murdered possibly by Farnese agents and Donna Olimpia now had her excuse. 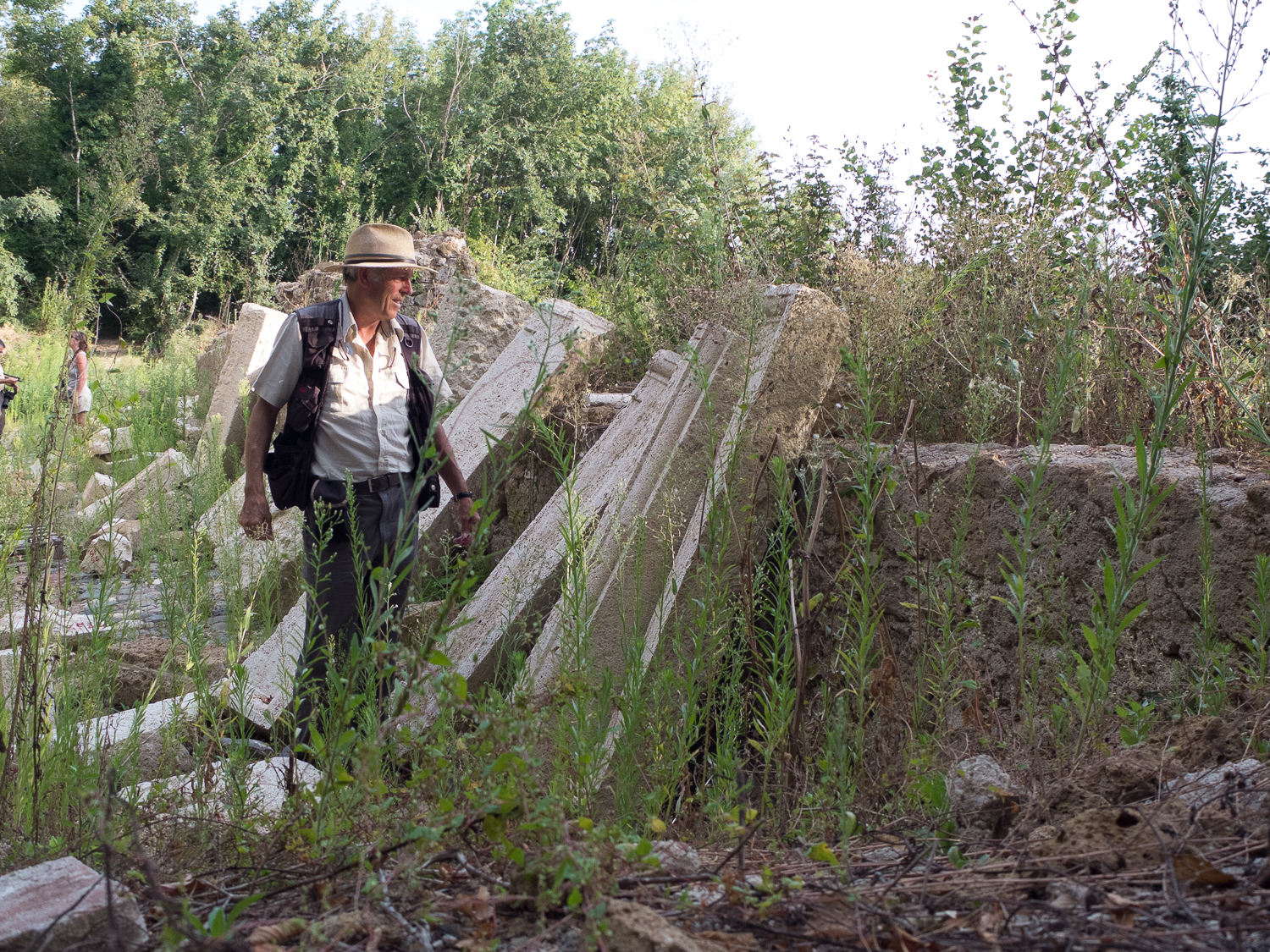 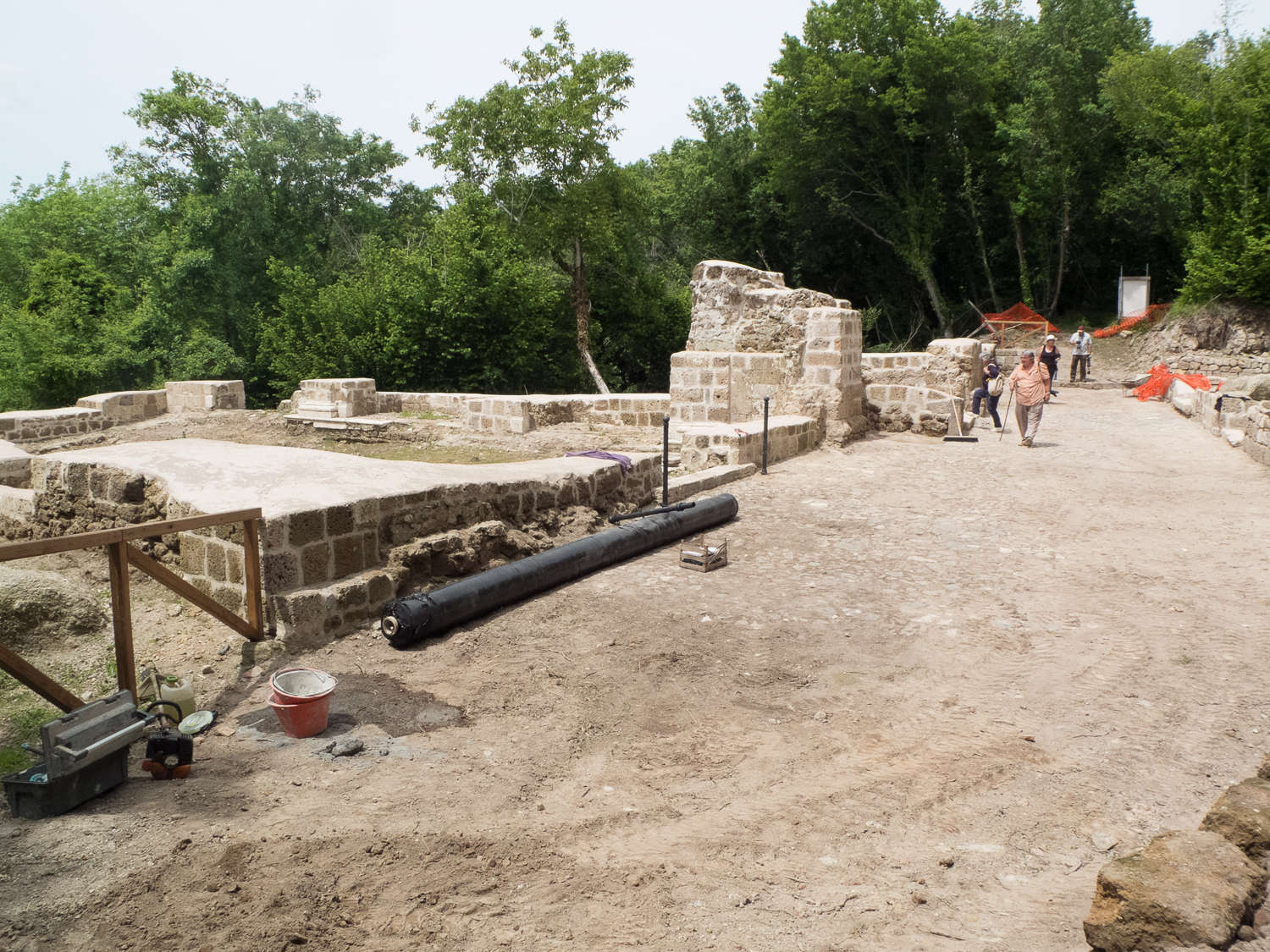 She convinced Pope Innocent to send his German mercenaries to lay siege to Castro in the summer of 1649. When the city fell the order went out that nothing was to remain more than knee high. Explosives blew up fortifications, cables pulled down principal buildings, carvings and statues were cast down into the ravines. It all sounds horribly familiar, but this was a papal army destroying a Christian city a mere 100km north of Rome. 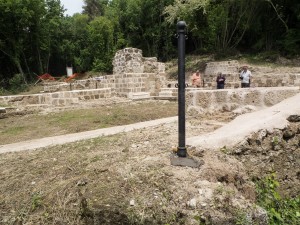 The surviving population, including its Jewish community, was dispersed amongst local towns, the forest took hold and Castro, a city that had been continuously inhabited since Etruscan times and before, was given the epithet The Carthage of the Maremma. 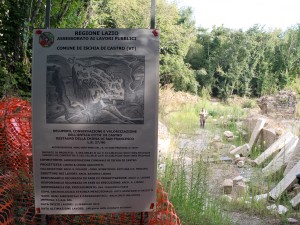 …but rescue is on the way, public funding, hooray!

However, the destruction has not stopped. The ruins have been plundered of treasures over the last 40 years. Fireplaces from Castro end up in refurbished country houses, 16th century doorways now open onto manicured Tuscan lawns, and frescoes revealed by recent legal excavations of enthusiastic, unpaid volunteers have disappeared onto the international art market, while what remains is being either ‘renovated’ with tons of cement, metres of plastic sheeting, and dozens of pointless mock iron railings, as a way of tapping into Euro-funding, or is disappearing fast through neglect. 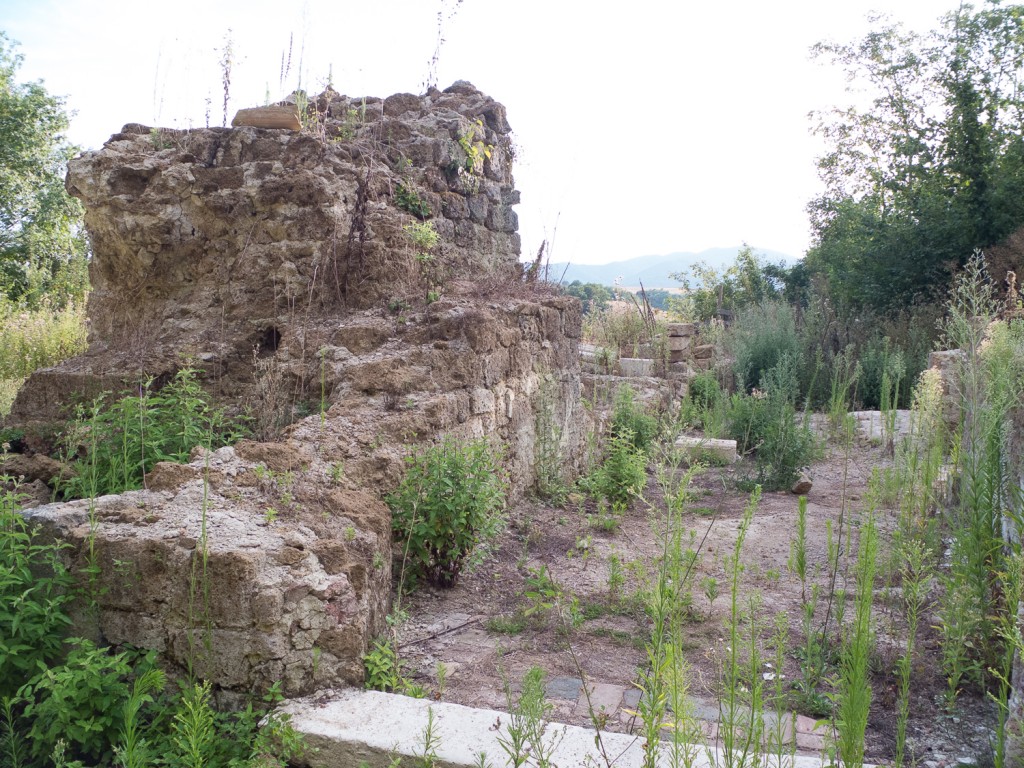 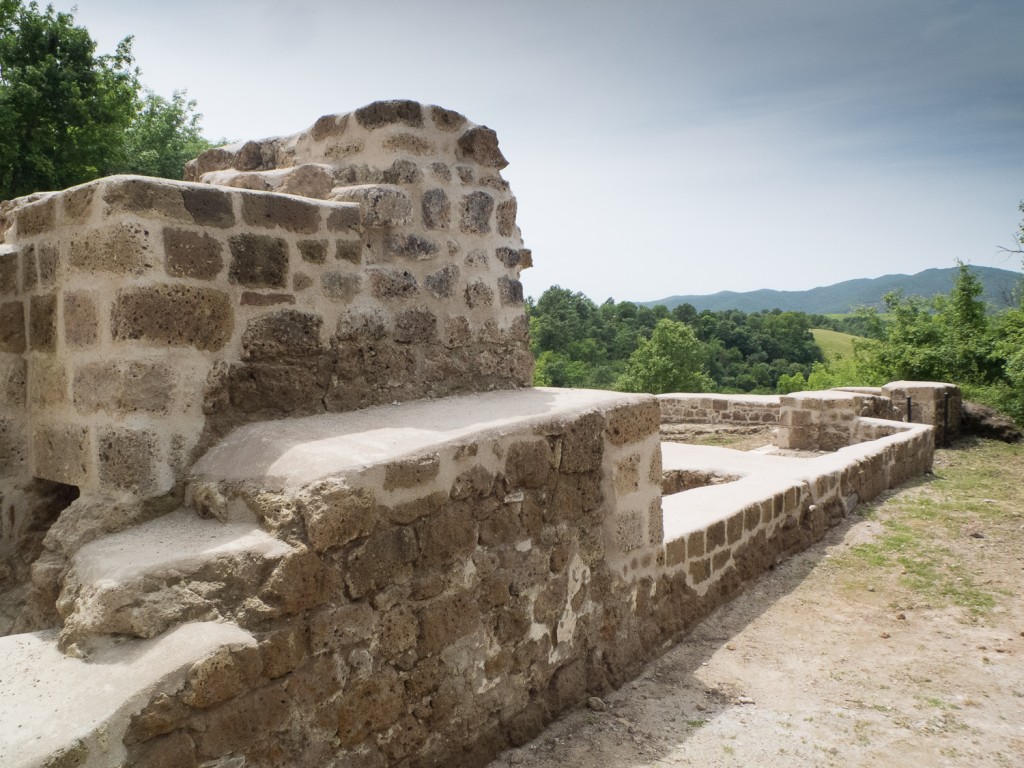 ……. and €445,000 after. Note that the paving is no longer there. Probably now in some local councilor’s rockery. 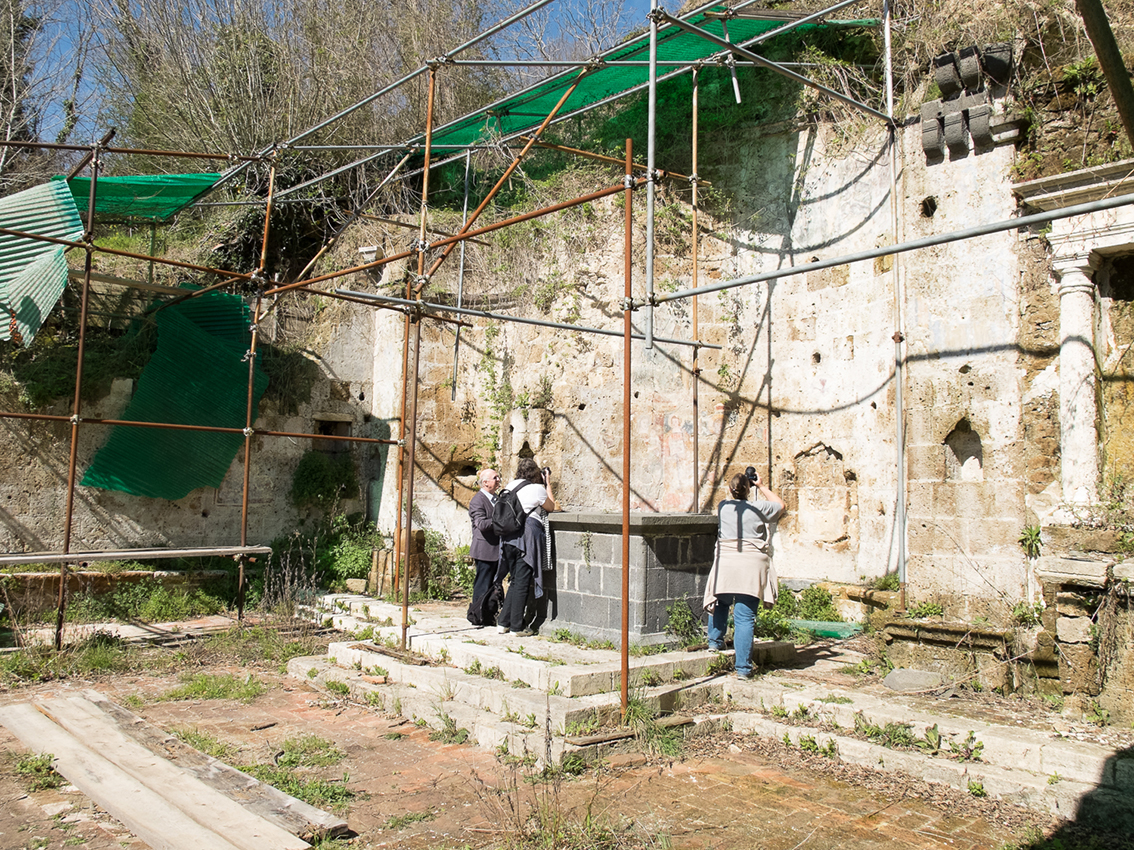 Santa Maria Intus CIvitatem, open to the elements and crumbling, is not 25 metres from the ‘restored’ area. The protective plastic sheeting  is all but destroyed. 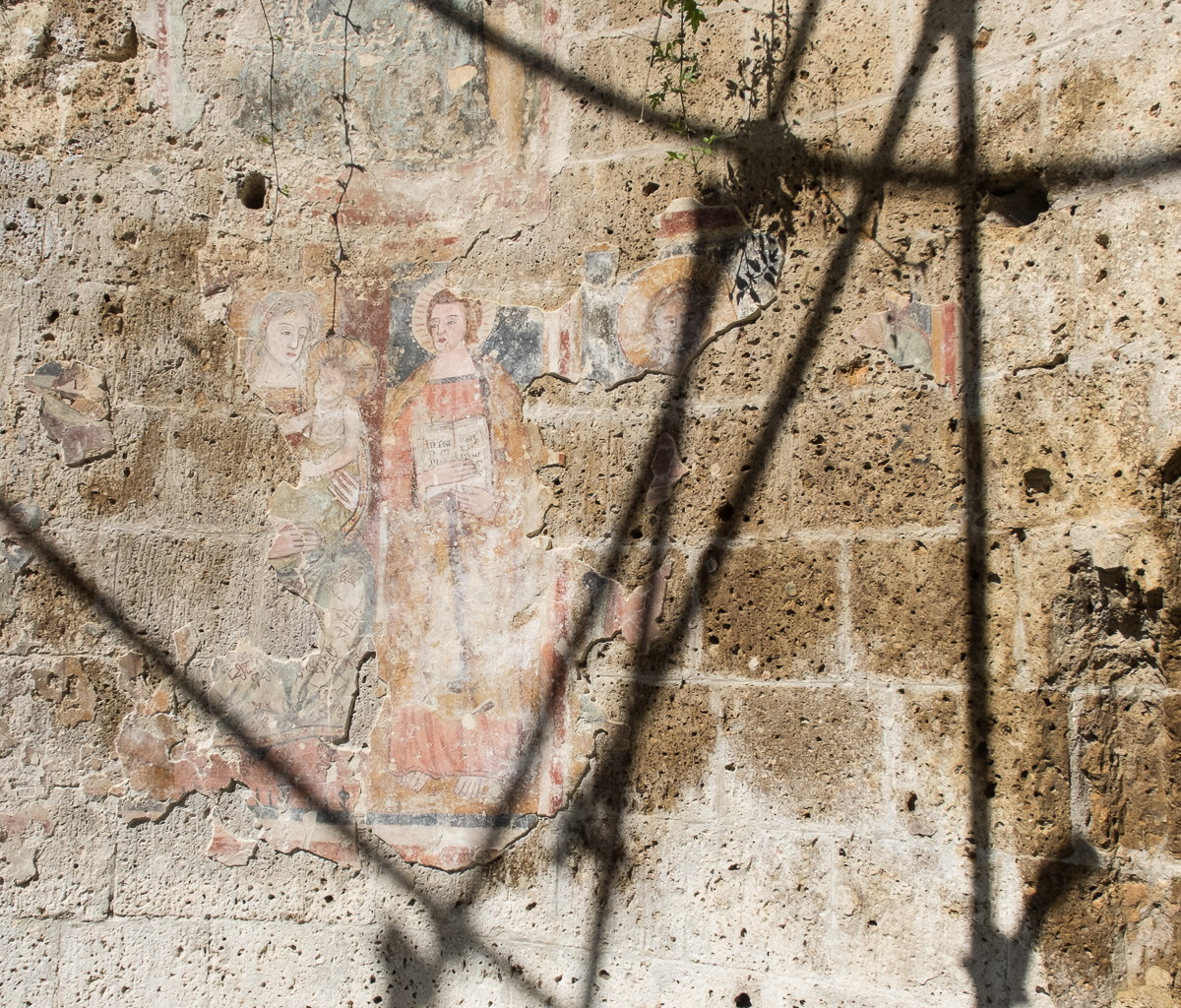 The frescoes that have not already been stolen are crumbling and fading – surely even thieving is better than this? 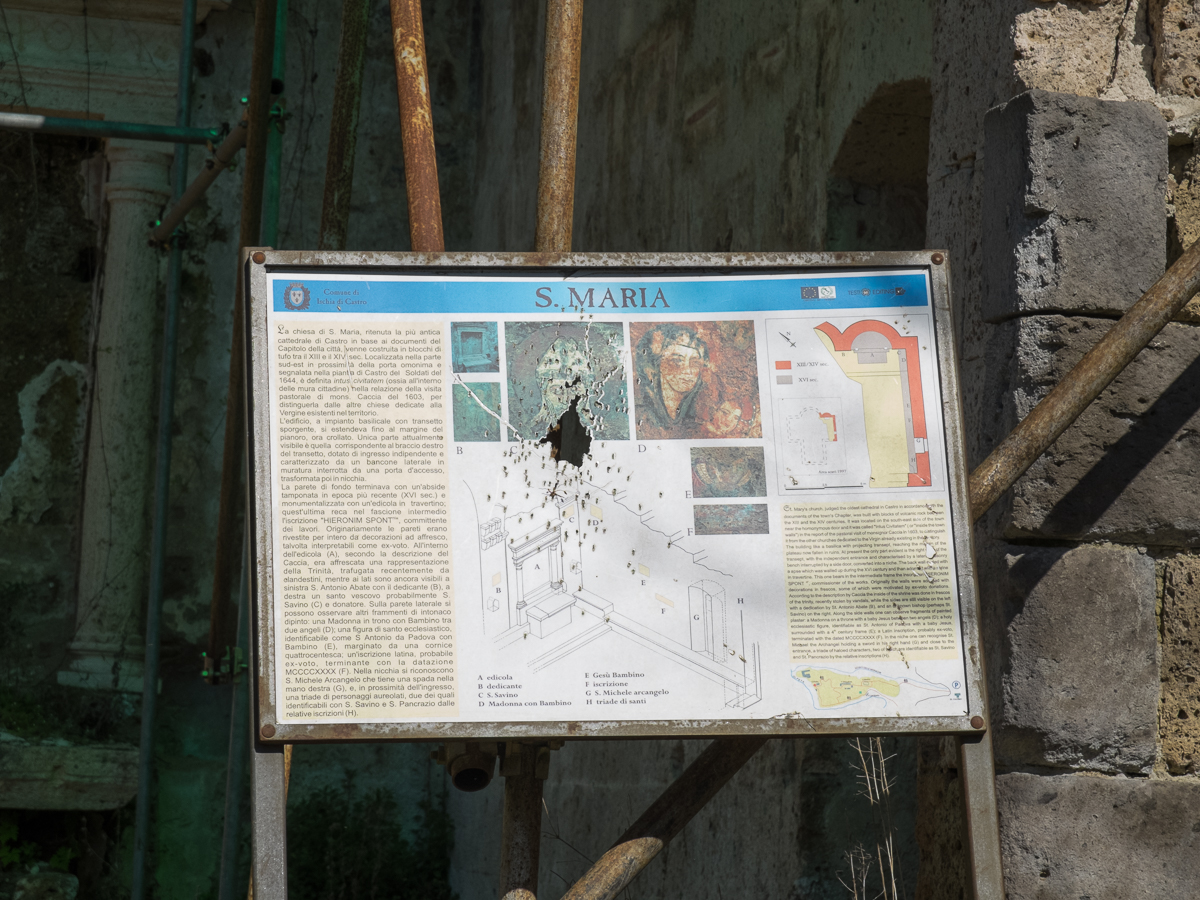 After Castro was completely destroyed the Papal army placed a stele in the middle of what remained of Piazza Maggiore, “QUI FU CASTRO” Here was Castro. Even that has disappeared. Maria has been weeping ever since, but she will not be weeping much longer, she will be gone along with almost everything there was worth weeping for. 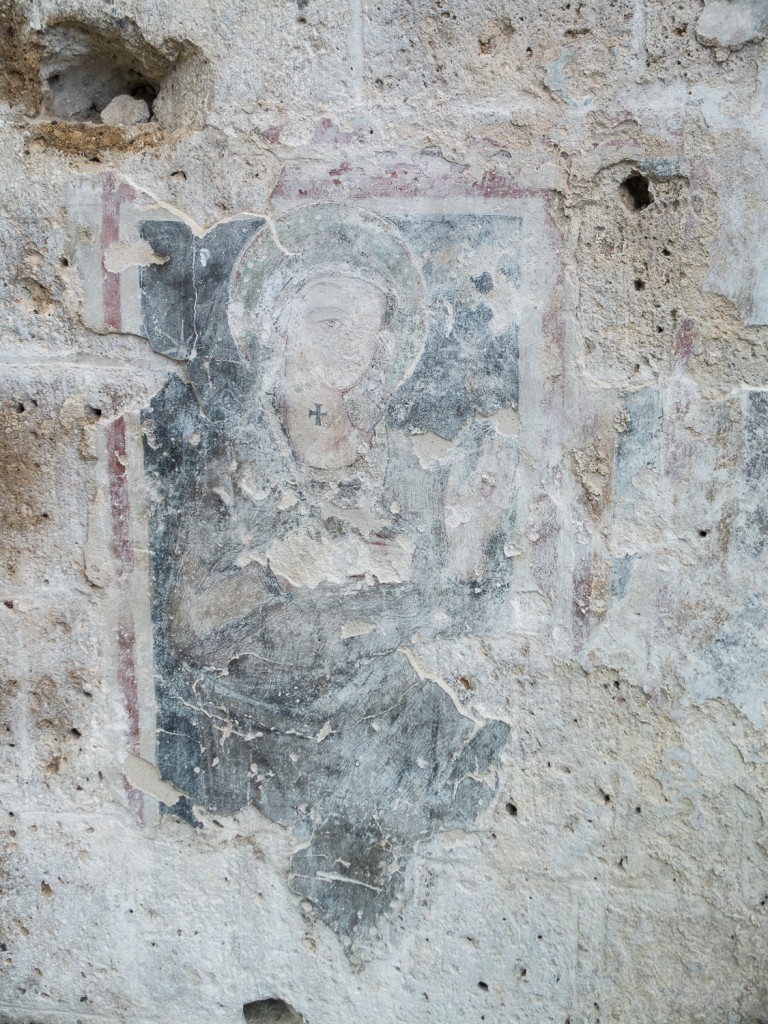 For more about Castro and our Photography tour in Italy, off the beaten track in Umbria, Tuscany, Rome, and Venice,  see my previous blog Castro the Renaissance Pompei.

Accommodation for Photography Tours in Italy and Photo Workshops participants.