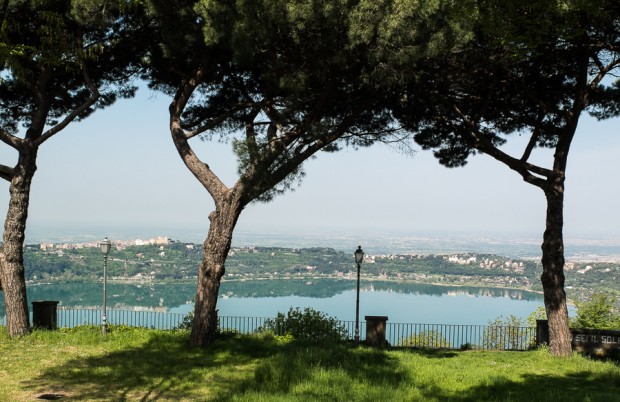 Rome is known as the Eternal City and no city on earth has a comparable wealth of ancient ruins. The tireless documentor of  Roman ruins Piranesi (1720-78) made a good living selling his topographical images to visitors on the Grand Tour. But whereas Canaletto used lenses and the camera obscura to ensure that his views of Venice were precise in every way, Piranesi was by training both architect and baroque set designer, and he drew for dramatic effect. 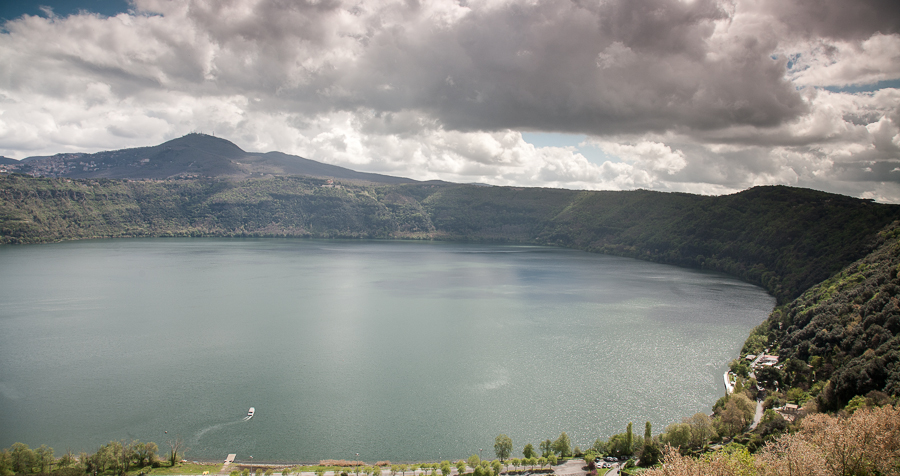 Lake Albano from Castel Gandolfo. You wouldn’t believe that a place like the Alban Hills could be just 20kms from the centre of beautiful, enchanting, but chaotic Rome

As a child Piranesi fired my imagination like no other artist. I dreamed of finding a Roman crypto-portico at the bottom of my granny’s garden, his imaginary prisons unsettled my nights, his overgrown dark towers and gloomy grottoes encouraged my own voyage to Italy, his  colossal Roman ruins  inspired my photography. 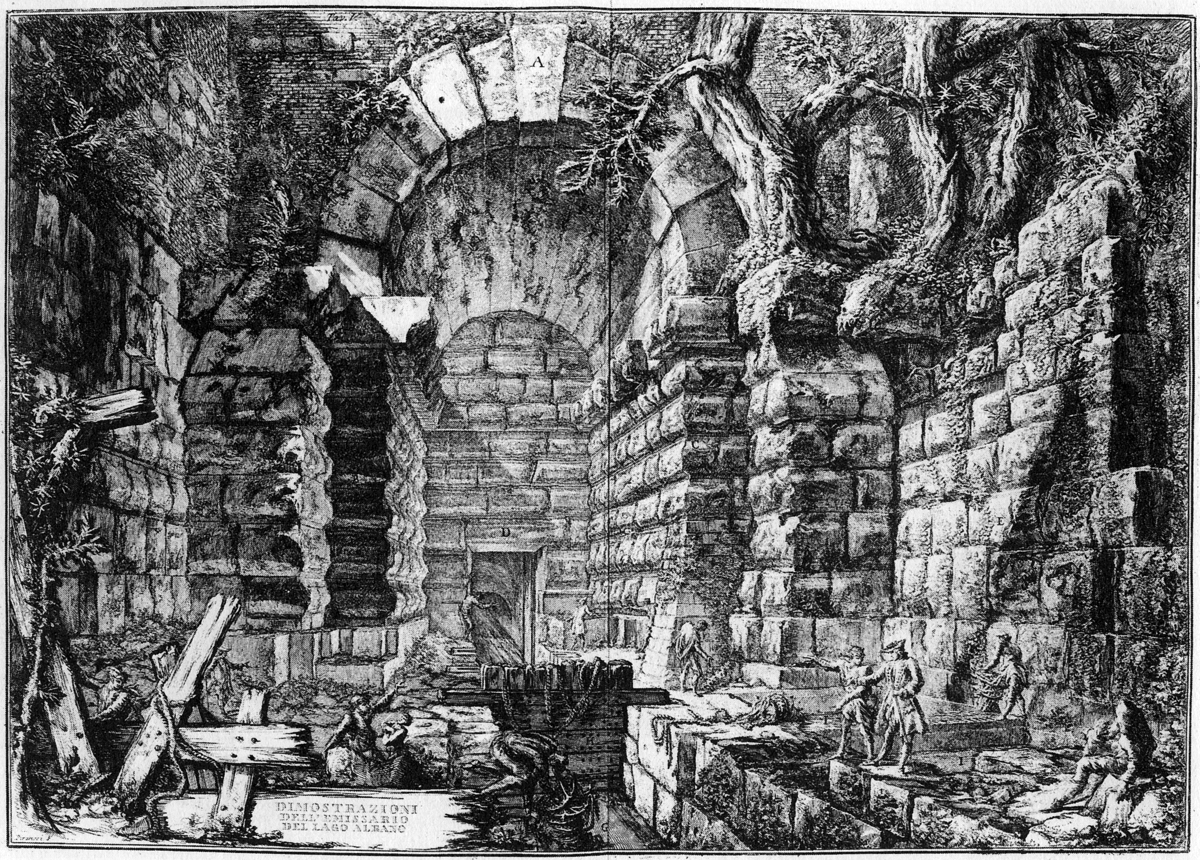 Piranesi moved art forward from Renaissance adoration of the classical to a baroque fascination with creating mood and theatrical effect. Piranesi’s perspective is unreal, his scale deliberately deceitful, and like a cinema poster designer in Hollywood’s golden age he sought to create gasps from his audience. 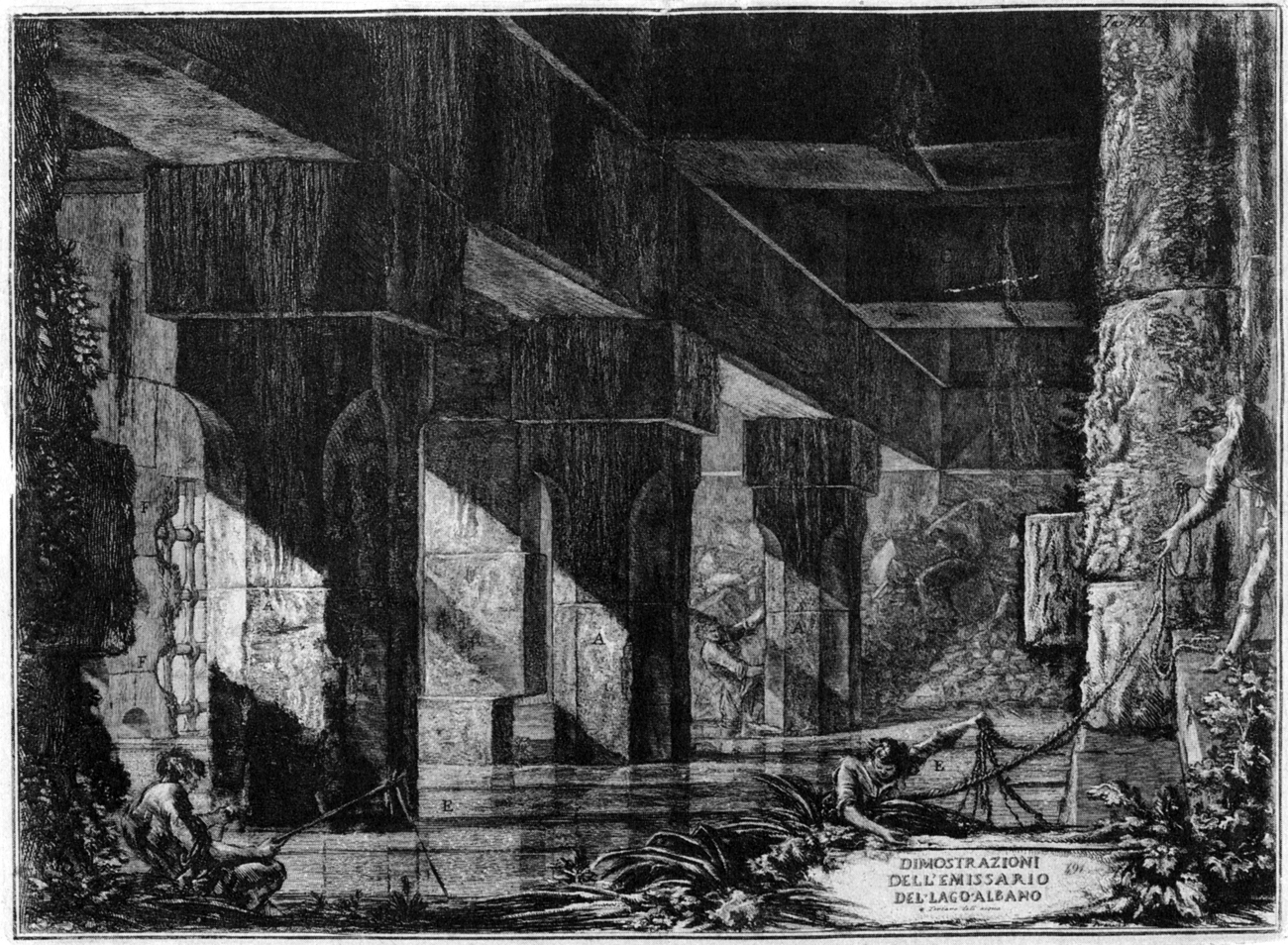 Piranesi’s print of the entrance Tunnel under Castel Gandolfo

One might be excused in thinking that the Caracalla Baths are anyway so huge that Piranesi is guilty of gilding the lily, yet many of his drawings succeed in exciting our curiosity precisely because he cheats. 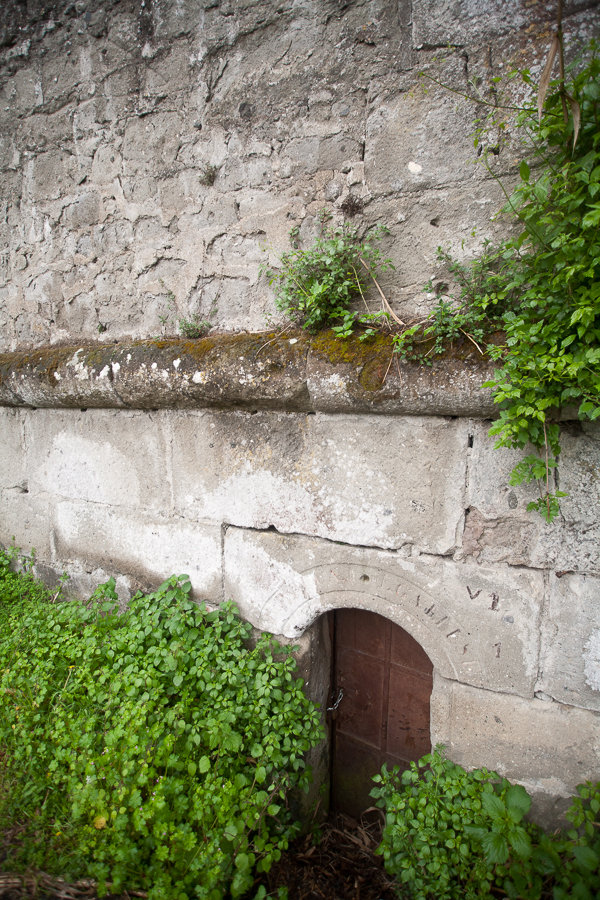 The locked low door to the great court. We crawled in under the road.

Whilst living in Castelgandolfo over ten years ago I set out to find the Emissario of Lake Albano after seeing Piranesi’s engraving which reminded me of a flooded Egyptian temple. 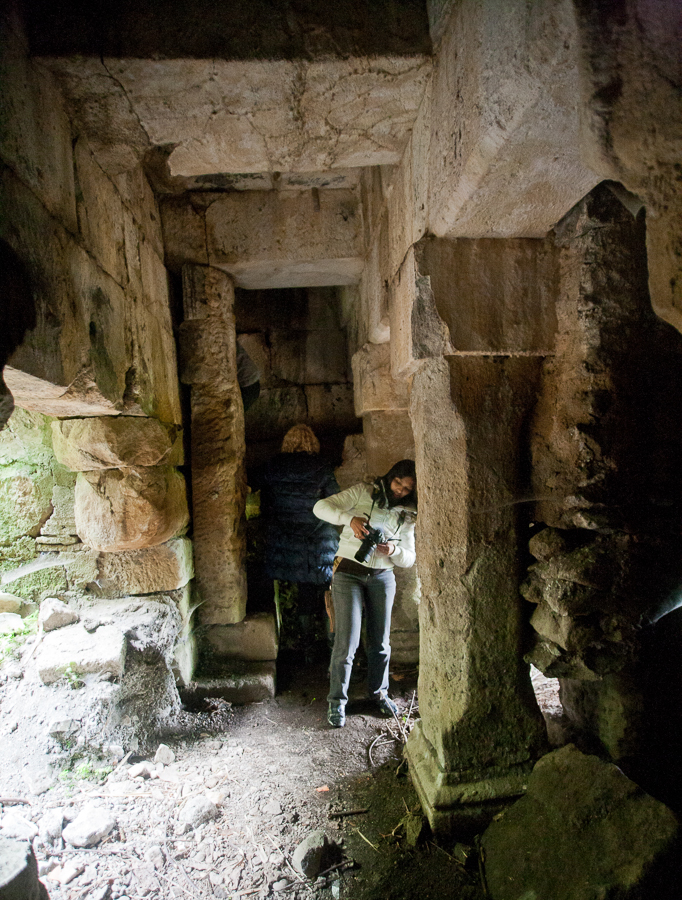 The reality. Water used to flow from lake Albano (left) into the tunnel the other side of the walled court (photo below) on the right.

The tunnel was constructed by Etruscan hydraulic engineers for the Roman Republic starting in 398 BC to drain lake Albano which otherwise on occasion overflowed with disastrous results for the Roman Campagna. Livy describes the work as taking place during the siege of Veio and required the labour of 30,000 slaves tunnelling from either end. It is 1.2km or nearly a mile long. 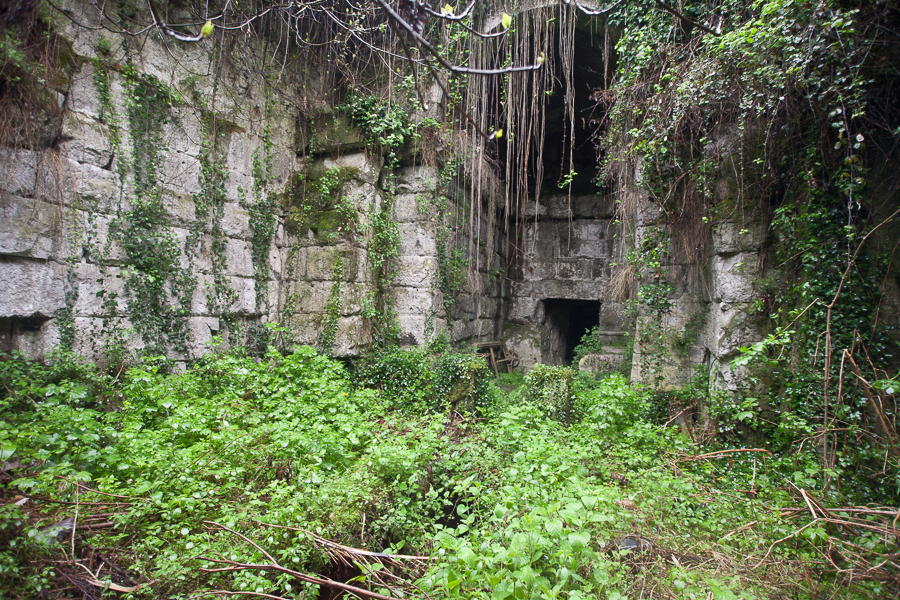 The courtyard. The entrance to the 1.2km long tunnel is clearly visible 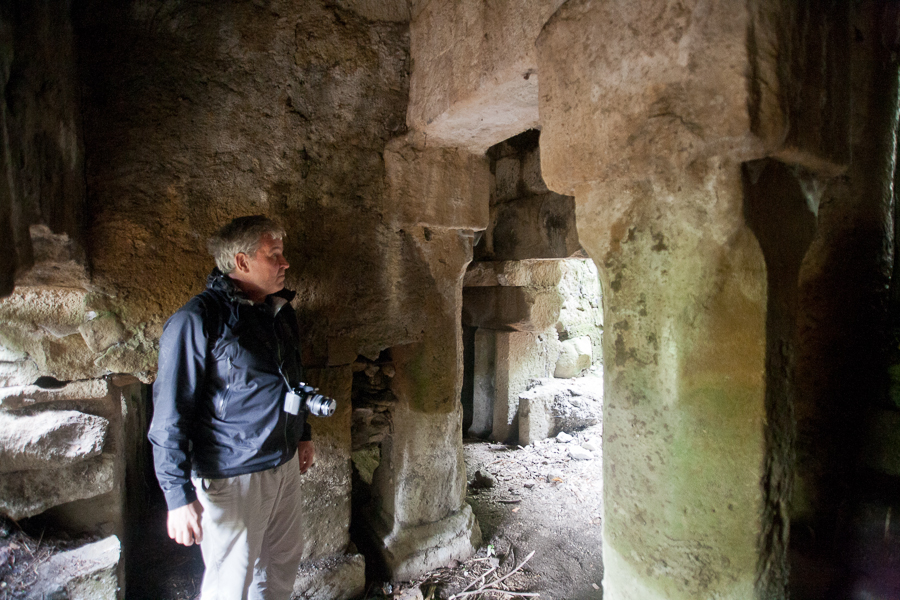 However a road runs along the lake shore and under the bridge was the former sluice gate, now high and dry as the lake level has unaccountably dropped over the last 20 years. It is possible to walk through at a crouch and though one can stand at a certain point I hardly recognised the Egyptian pylons, reduced as they were to Lilliputian scale. How had I been conned? Piranesi has included tiny figures, a fisherman and a cavorting nymph, a brilliant trick! 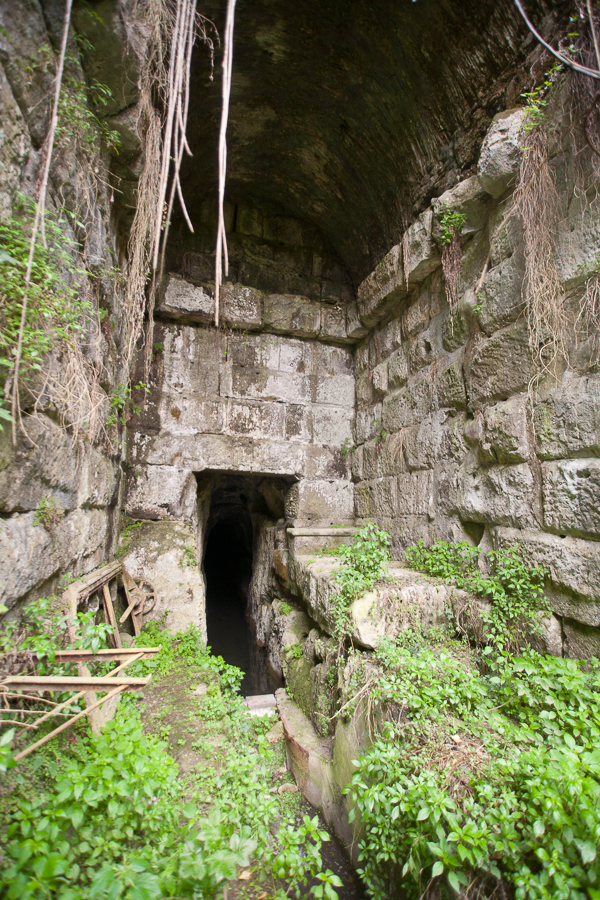 The entrance to the 1.2km long tunnel

Place to photograph around Rome: The Temple of Diana in Nemi

One comment on “Hidden Treasure to photograph: The Roman Tunnel, Lake Albano near Rome Italy”