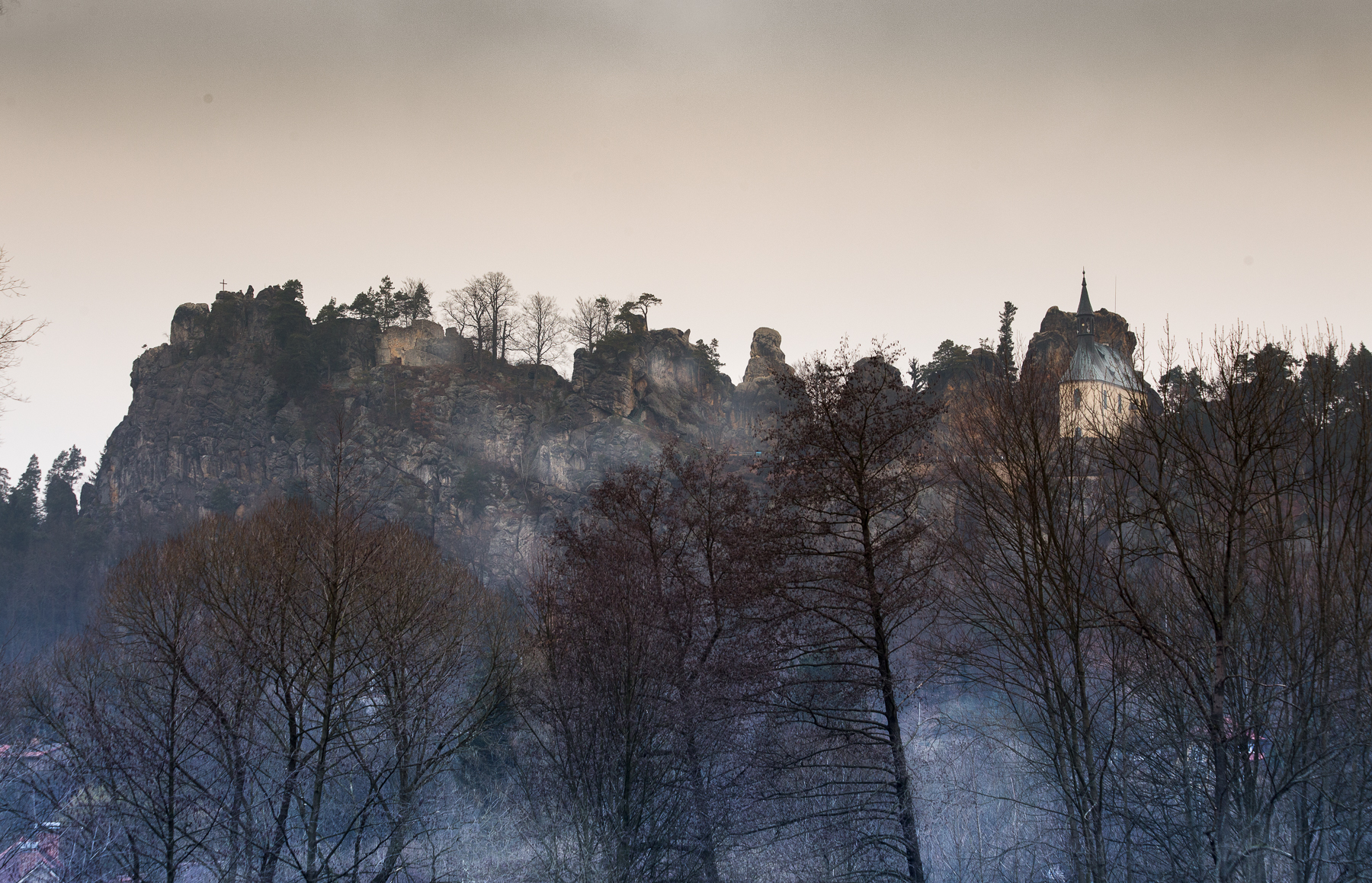 The Bohemian Paradise and  Golden Prague in February

Course leader and photographer Patrick Nicholas met old Camera Etrusca clients Peter and Deborah in Prague for the first photo workshop in Bohemia. We then headed off by car with our host my old friend Milan Šroubek to the Bohemian Paradise (Cesky Raj) an hour to the north of Prague. We stayed in Milan’s traditional Czech cottages in Malá Skála (lit. Little Rock) a charming village on a river surrounded by hills. 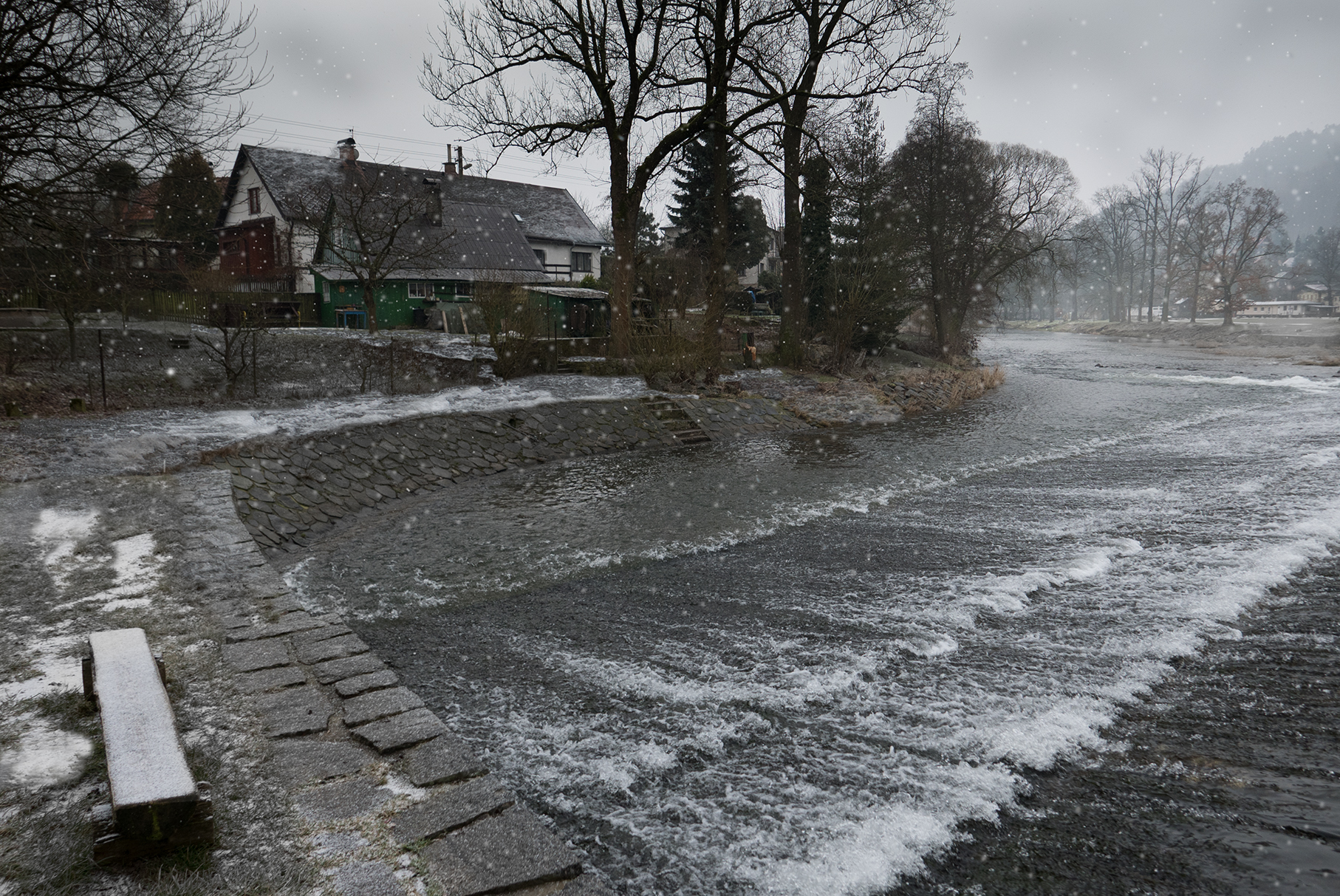 Malá Skála. The weir on the Jizera river. Milan’s cottages are among the trees on the left. It snowed our last morning.

The weather was cold and there was still some snow on the ground especially in the hills; it snowed on our last day. The area is famed for its sandstone rock often in the form of columns, many of them capped with enchanting Gothic castles and churches. We made a day long excursion to Hrubá Skála nearby. An area of high rocks, enchanting fairy castles and dark tales. 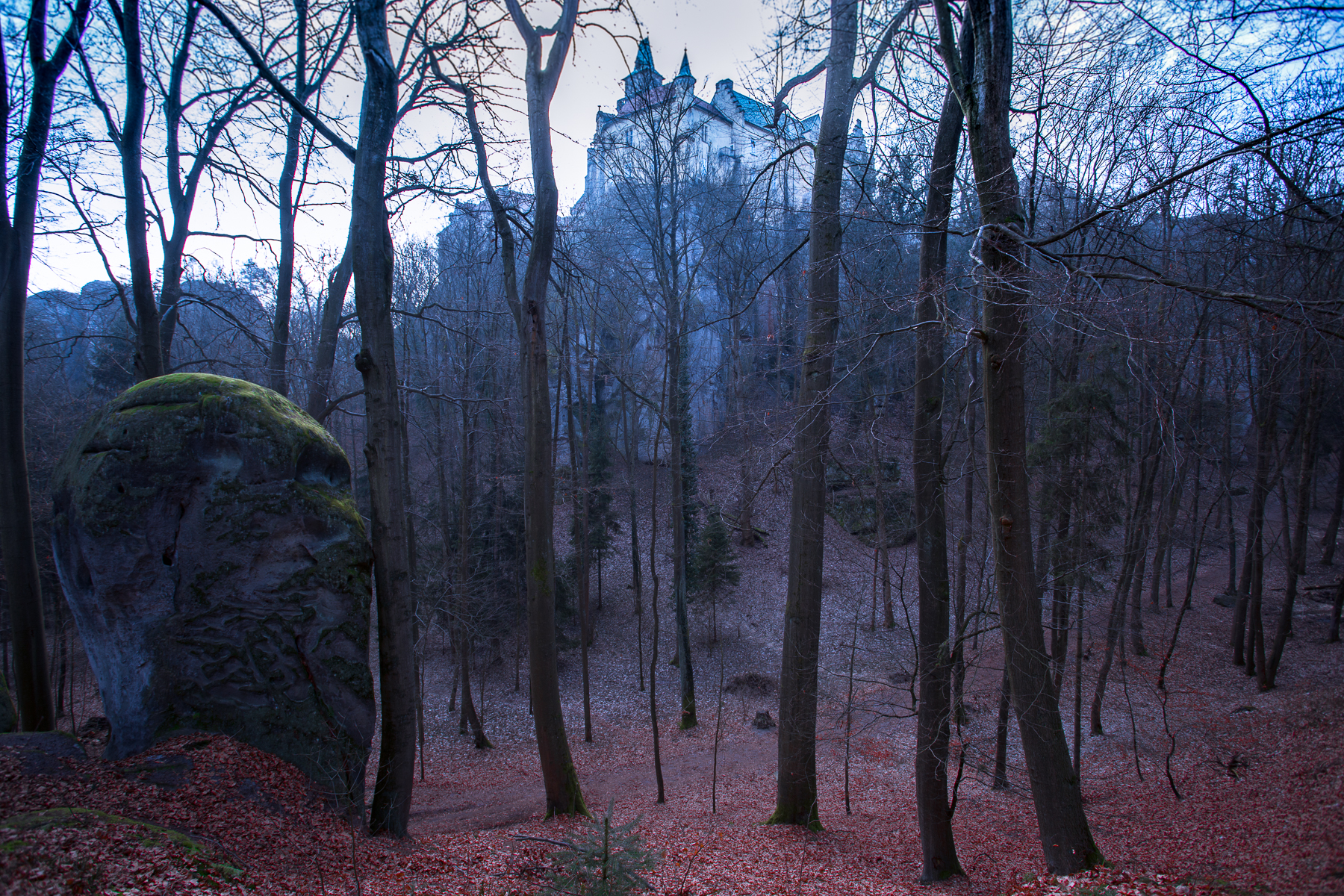 The area is popular with film crews, the winter scenes in the Narnia series, Wuthering Heights, Brothers Grimm and Van Helsing were shot in the area. 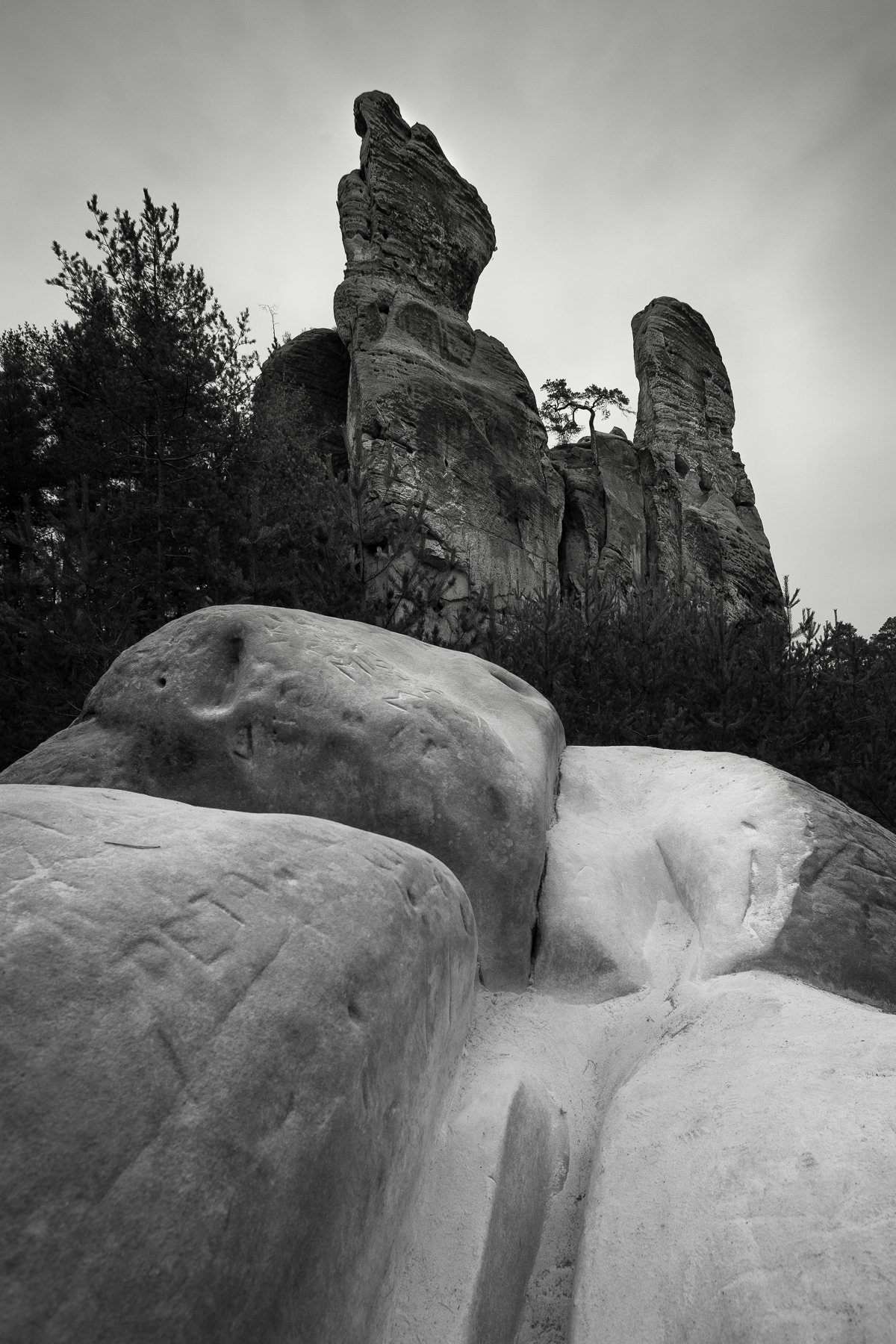 The Bohemian Paradise extends north of the border into Germany where it is known as the Saxon Switzerland. The 19th century German Romantic painter Caspar David Friedrich was enchanted by the monolithic rocks and the dense forests painting many of his most memorable pictures in the area.

The Wanderer above the Sea of Fog is perhaps his most famous. I find him inspiring because he is not a topographical painter, he paints what he feels is the spirit of a place. He sketched in the open, but painted in his spartan, uncluttered studio (to avoid distraction) largely from memory; perhaps because of this many of his paintings seem to be from the point of view of an observer hovering several metres above ground. Many of his pictures are in a vertical, portrait format. I believe a photographer does not have to create perfectly crafted Ansel Adams type of pictures, there has always been room for a more romantic view of nature and landscape. 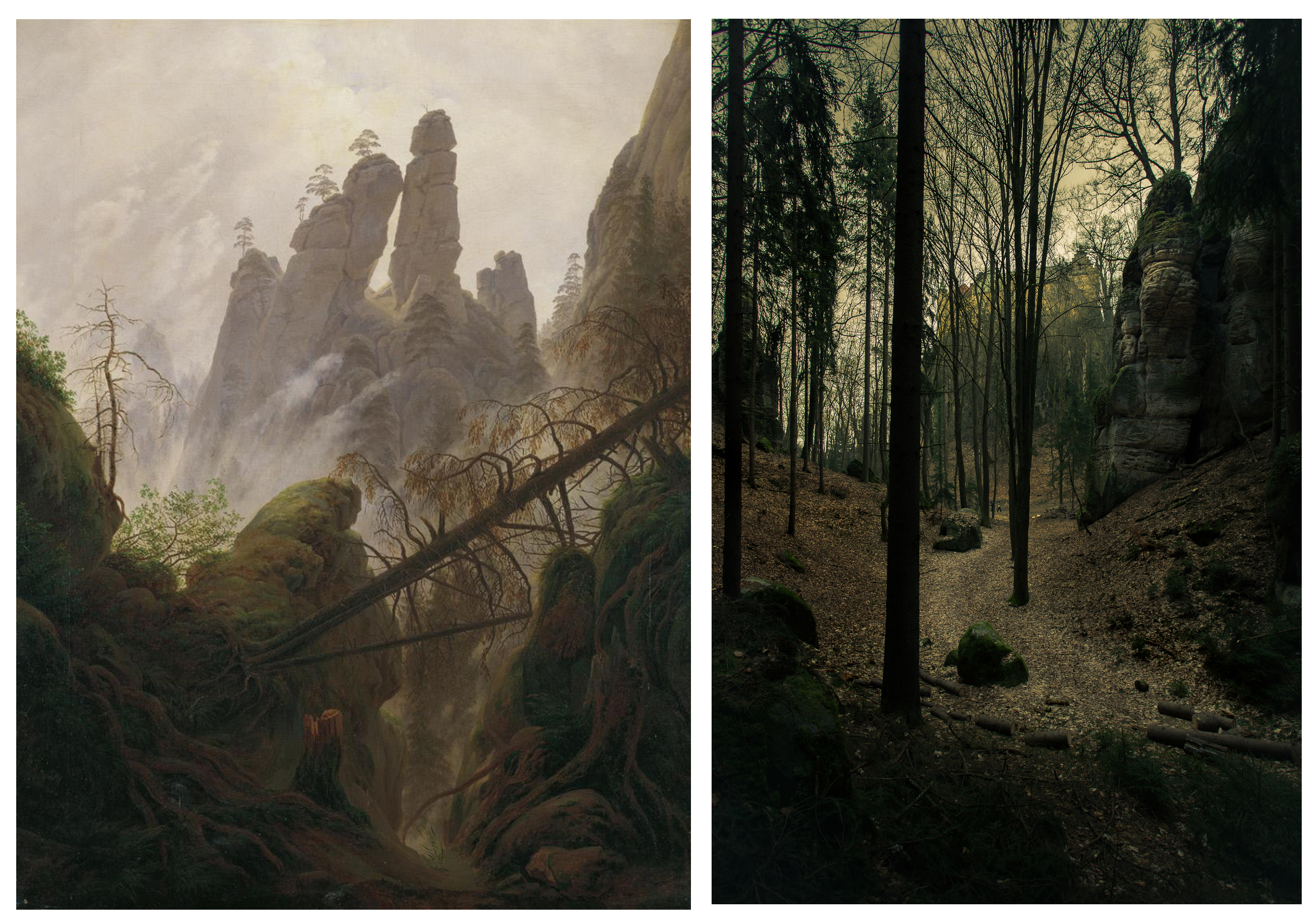 The Bohemian Paradise is an area of characteristic wooden dwellings, castles, lakes, waterfalls and rapids and deep ravines. 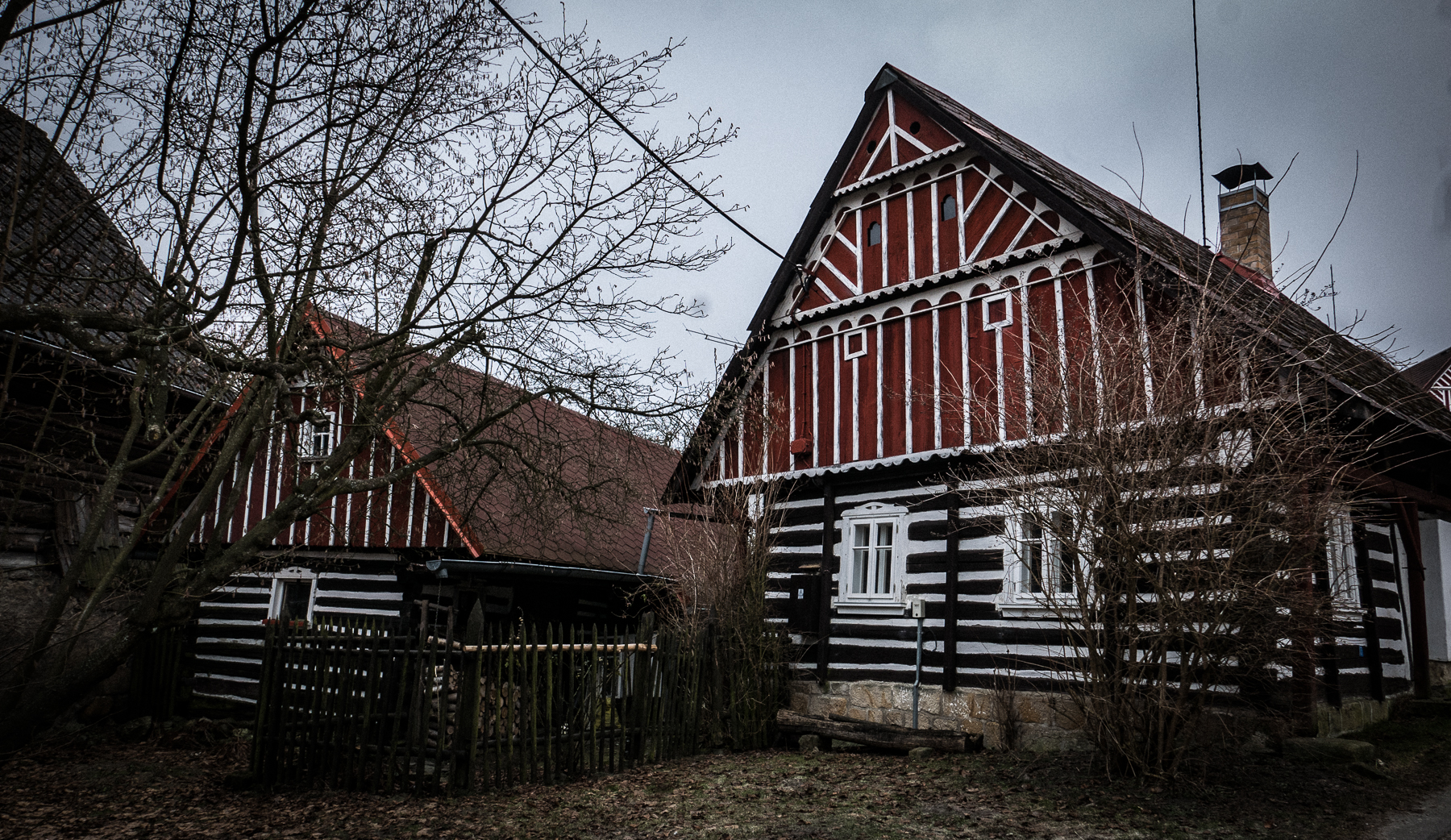 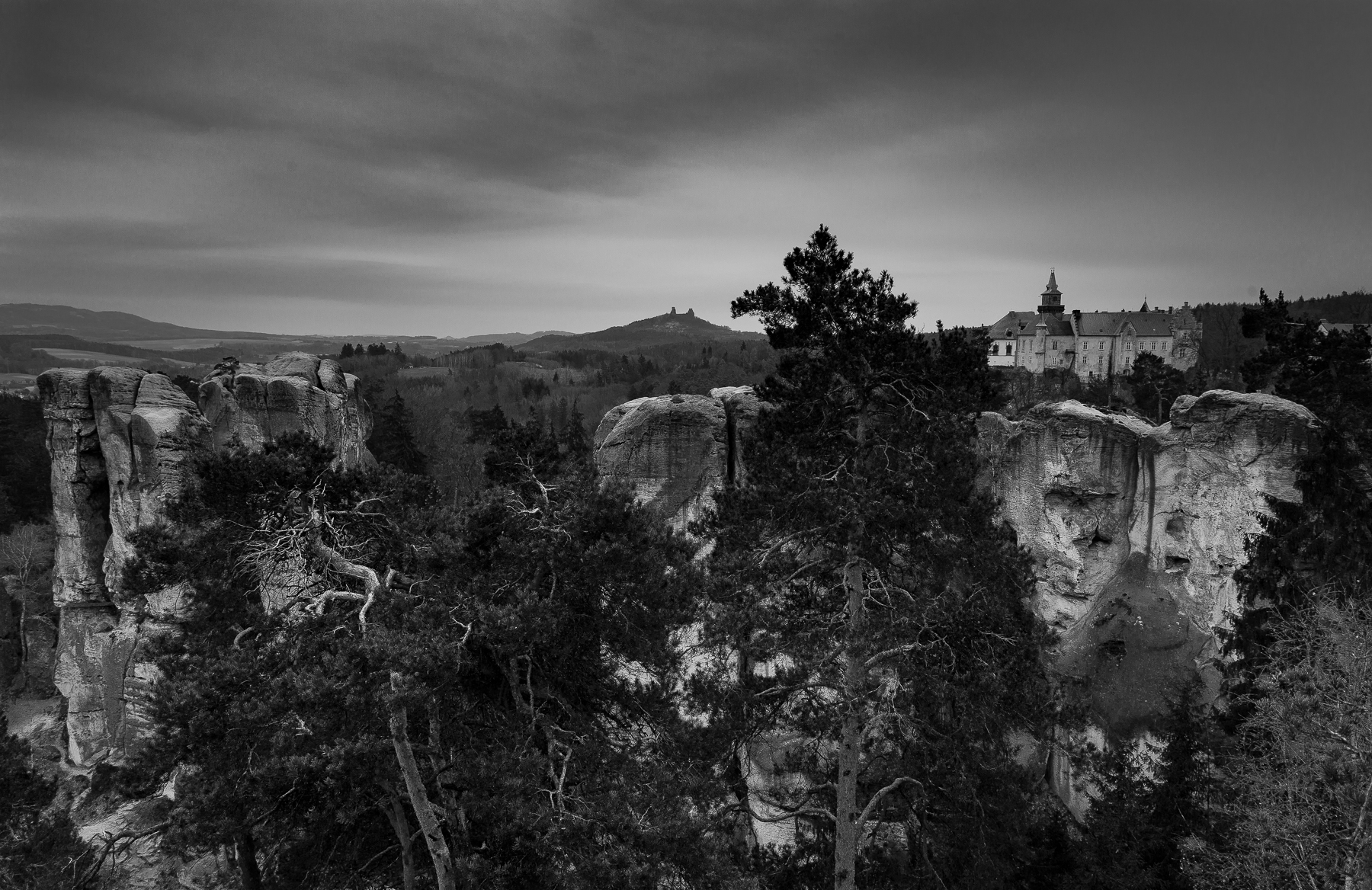 Hrubá Skála castle in which there is a first class but reasonably priced restaurant. The sinister twin ruins of Trosky Castle on the skyline. 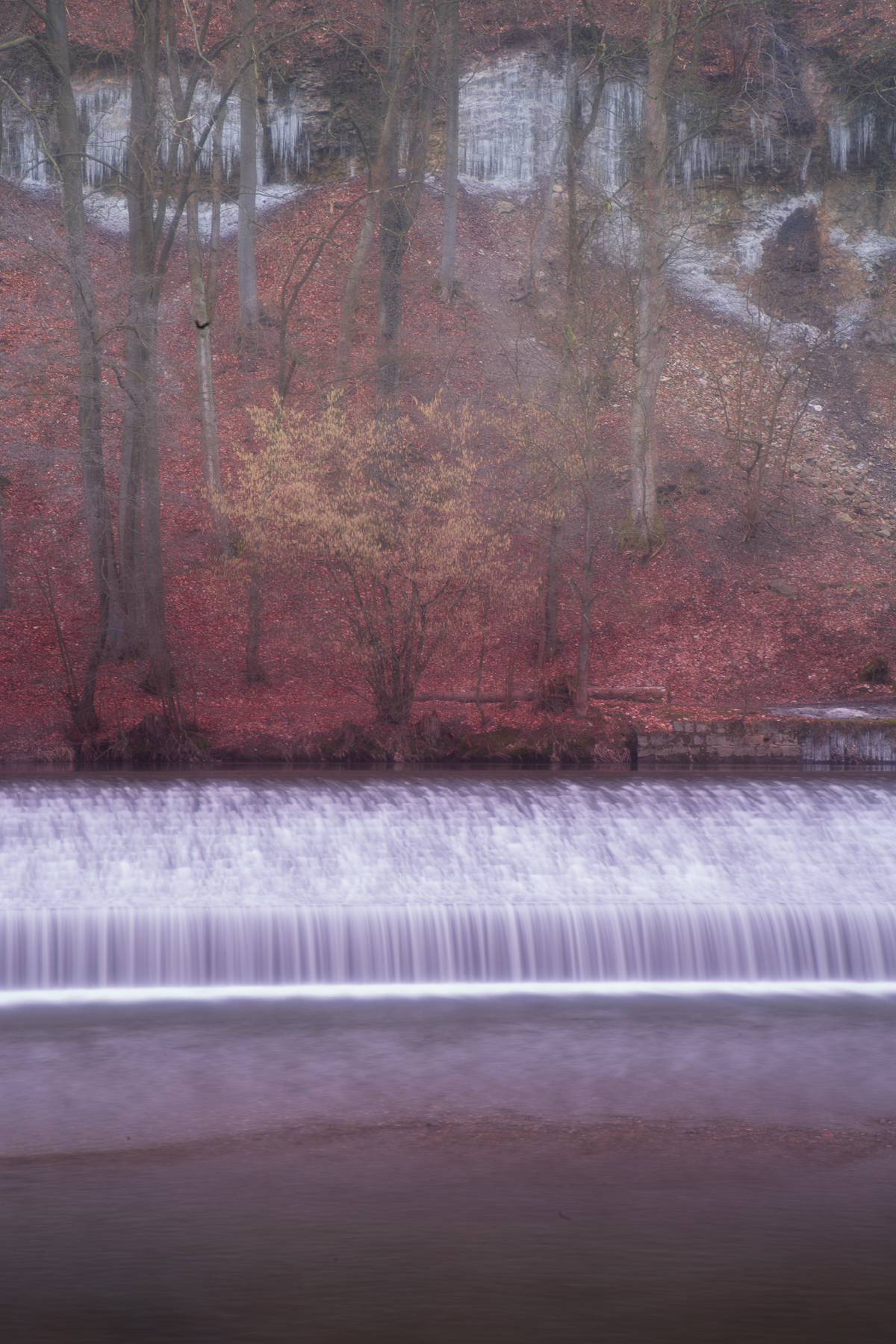 Foggy morning on the  Jizera weir with icicles hanging on the rocks behind (15 sec exposure with ND filter). 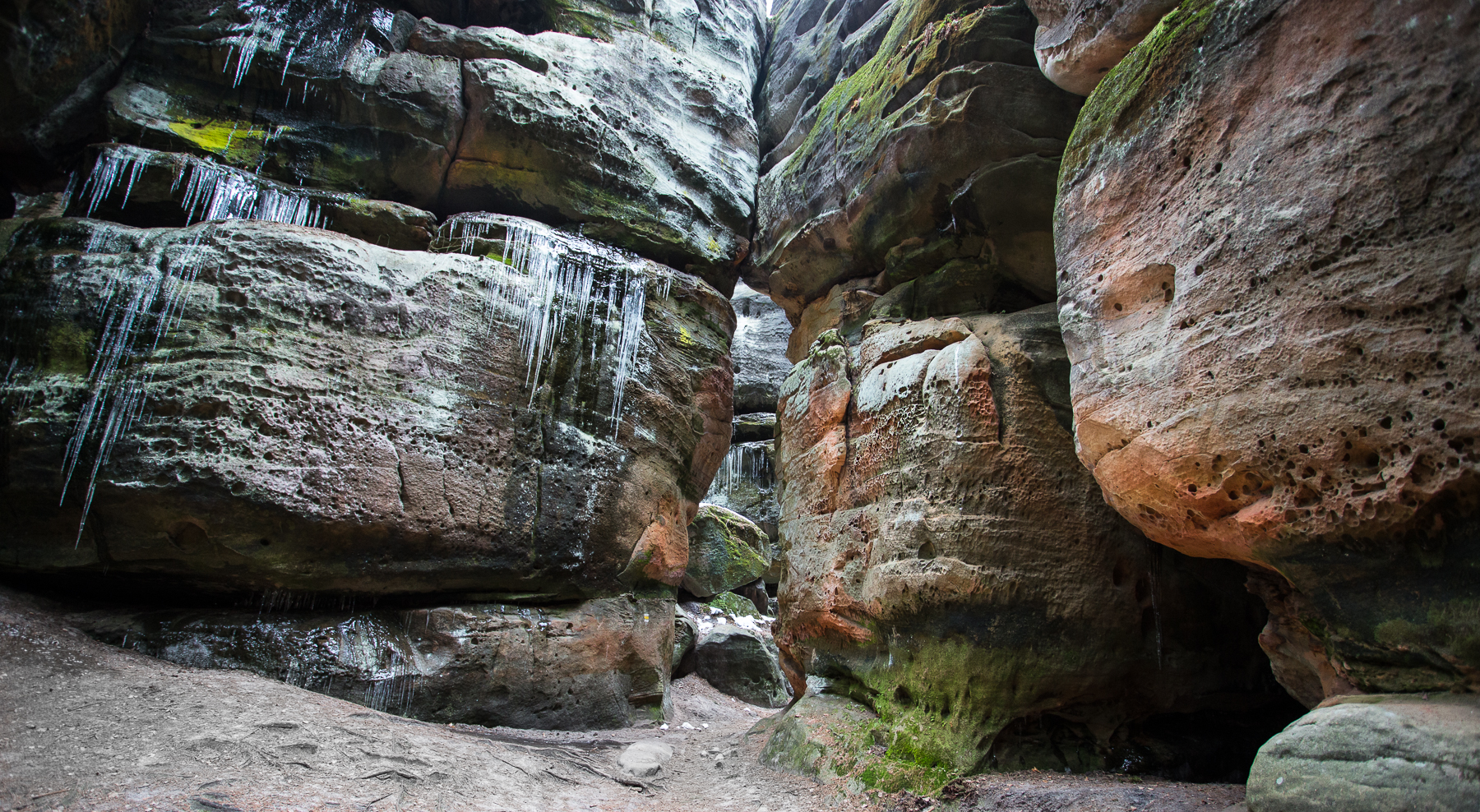 Icicles hanging from Malá Skála’s cliffs, a frosty winter wonderland. The rock is full of iron and other minerals, leaching out in vivid colours from lemon yellow, through emarald and sapphire to vivid orange. 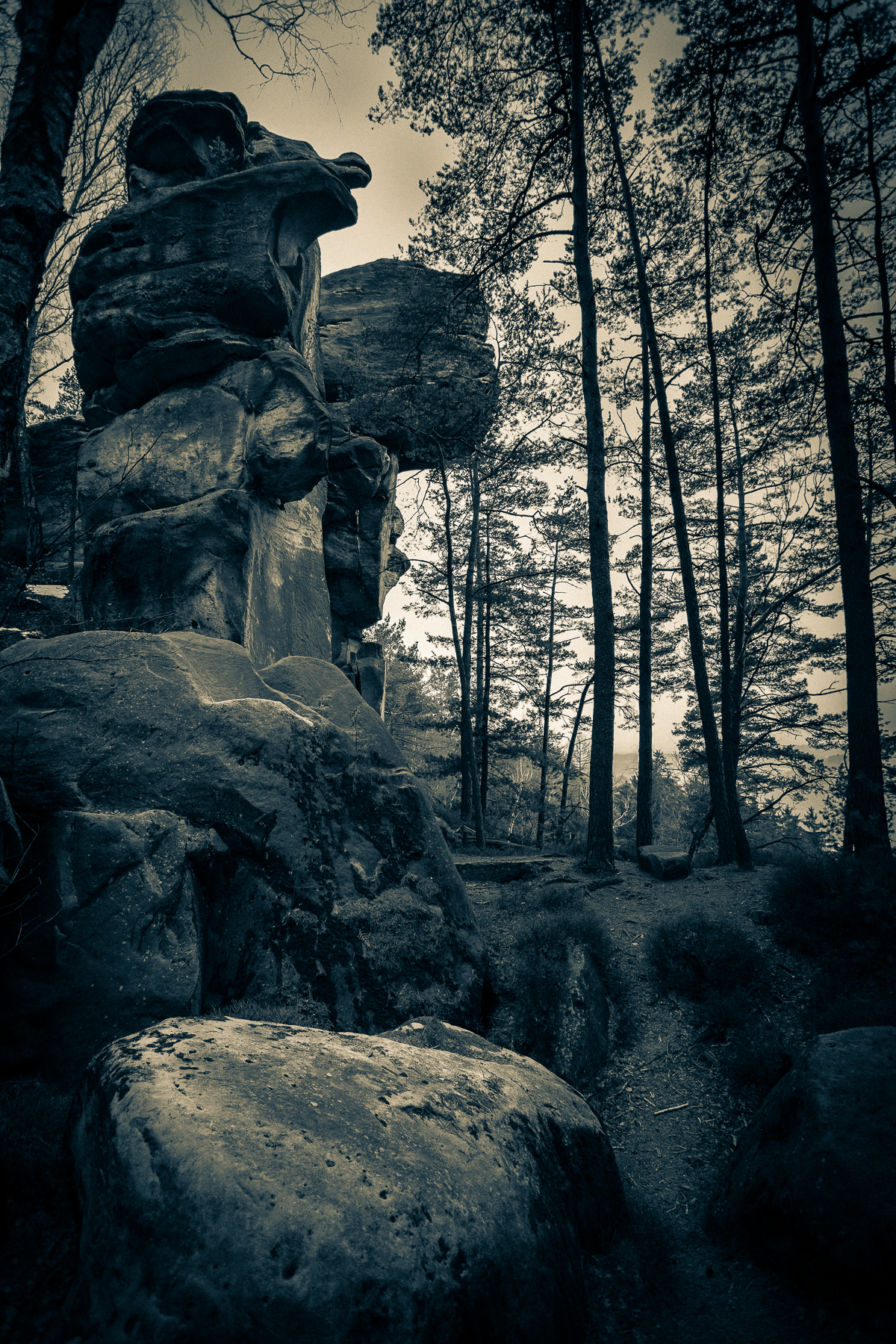 A split tone image of Monolithic rock above Malá Skála

The first photo workshop of the year is in the Czech Republic, first weekend of February, 3 nights in Cesky Raj, the Bohemian Paradise, followed by 3 nights in Prague. We shall have another in October.
The Portugal photo workshops are in the Algarve in late May;  Lisbon and the coast in November. If you are interested get in touch.

All photographs in this blog post copyright Patrick Richmond Nicholas 2018 – they may be used with permission. For more landscapes by Patrick Nicholas visit www.photonicholas.com

The Wanderer above the sea of Fog by Caspar David Friedrich (1774-840) is held by Kunsthalle Hamburg.

The Rocky Ravine in the Elbe Valley, Saxony is in the Österreichische Galerie Belvedere. Vienna.

Part 2: Camera Etrusca is not just about f stops, tripods and photography…. 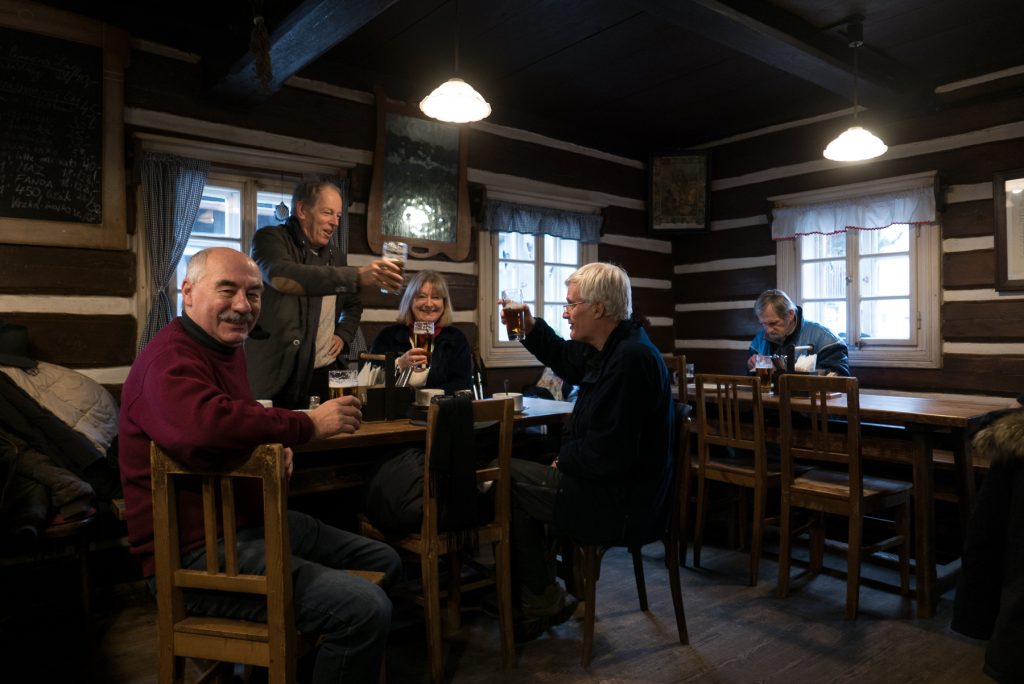 Lunch in the Hostinec in Malá Skála- Winter photo workshop in Bohemia.

About Photo Workshops in italy