Civita Bagnoregio near Orvieto is a really ancient place, melancholic, picturesque…. and dying.  The tufa cliffs on which it is built are crumbling into the valley below taking houses with them. Until comparatively recently the road signs pointed to Civita, la citta che muore – the dying city. They were removed as this gloomy message  appears to have discouraged tourists, but unfortunately the dying continues apace. 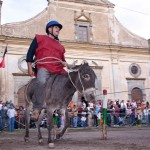 Civita Bagnoregio is a supremely melancholic place to photograph. Rather like a miniature Orvieto (20 miles away) it is perched on a hill, with the most dramatic backdrop of crumbling clay ridges and ravines, with the Apennines looming in the far distance, it is rather like an Italian Monument Valley.

The mercifully almost un-restored church of St Donato stands on the site of an Etruscan temple, the pillars of which still front the square which in turn is unpaved and serves as a racecourse for the absolutely un-thrilling donkey-derby held twice a year.

Although many of the buildings are in ruins – including the birthplace of St Bonaventura most of which has fallen over the edge – many of the old buildings around the square have been sympathetically restored and turned into weekend bolt-holes mainly for arty Romans. The film director Tornatore (Cinema Paradiso) has a house there which he uses to write his screenplays.
Civita Bagnoregio has been sacked by Goths, bombed by  Germans…and the allies, shaken by earthquakes, but the worst devastation in my opinion was caused by the engineer who built the hideous new concrete bridge up to the town in 1965 – thank goodness for Photoshop. With luck one day it will be replaced, or at least clad in stone, but by then there may not be a town to go to, it will have crumbled into the ravine.

Civita with its lonely tower guards the Tiber valley