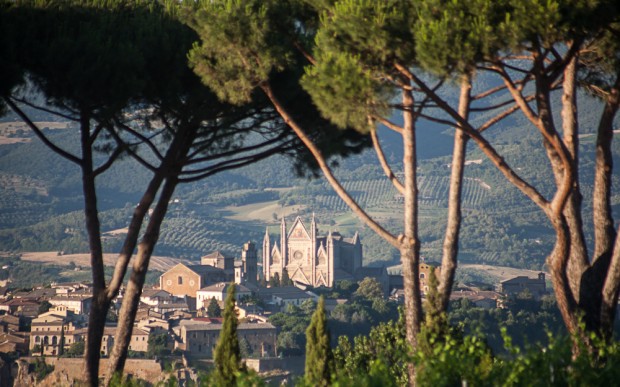 The umbrella pine, supreme among Mediterranean trees since Etrusco-Roman times is, to quote the woman in our local nursery here in Orvieto, fuori moda, out of fashion.

Pines on the Tuscan coast, Gulf of Baratti (Patrick Nicholas)

How can this be? Known also as the Italian Stone Pine it is recognised all over the world as an Italian icon. So I ordered two for €45 each, my own rather insignificant counter attack against the inexplicably destructive campaign by planners, architects and even artists throughout Italy to neglect them at best, chop them down at worst. 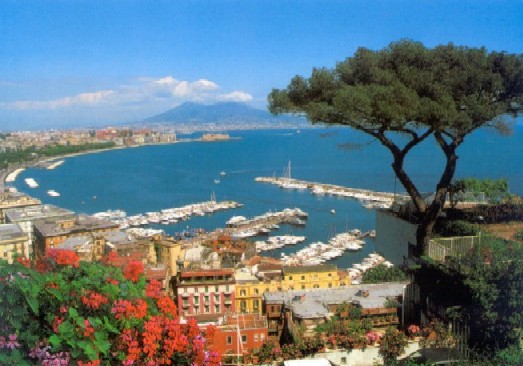 Postcards of the bay of Naples still feature the lonesome pine despite the fact it was felled over 30 years ago and never replaced; 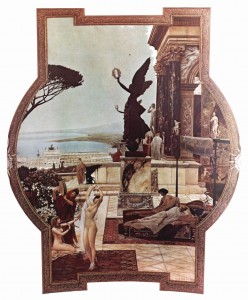 there is no umbrella pine at the Greco-Roman theatre in Taormina, Sicily as imagined by Klimt; 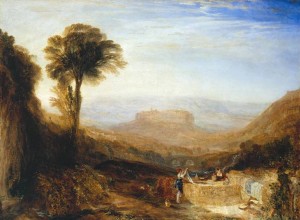 the pine in the mid distance of William Turner’s celebrated view of Orvieto is long gone; and most recently of all, every single pine in La Spezia’s Piazza Verdi was felled despite a long campaign waged by local inhabitants. Internationally known art critic Vittorio Sgarbi lent his weight to the protest, while overseas friends of La Spezia railed against this wanton act of destruction. And the final insult, this was in Liguria, the region that has given the world Pesto Genovese, the essential ingredient of which is the exquisite pine nut, the pinolo. 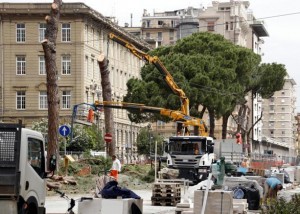 The pines were planted during the fascist period and this is often sufficient motive for modern architects and planners to justify their acts of vandalism.  At 80 years old the La Spezia pines were not even middle aged, indeed they had not even reached their prime. After a hundred years or so the umbrella canopy spreads further giving even more shade below. They live nigh on 300 years. The refurbishment of the piazza was thrown open to international competition despite the fact that most citizens were happy with their shady piazza as it was. 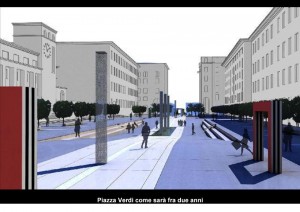 Shade-free Piazza Verdi with nano orange trees as it will be.

The competition was won by French conceptual  artist Daniel Buren (aka ‘The Stripe Guy’) with architect G.Vannetti from Florence. It is curious how the ’68 generation of artists (Buren was born 1938), while adhering to a nominally democratising revolution, has found itself trampling on the opinions of the citizenry of provincial cities like La Spezia. The hitherto ignorant and uncultured citizens may in time come to appreciate the conceptual art of Buren with its striped, apparently pointless, primary coloured, two-dimensional arches; modernist obelisks and candy striped fountains, though I suspect their new found enthusiasm for abstract minimalism may be tempered by the minimal shade offered by the nano orange tree. 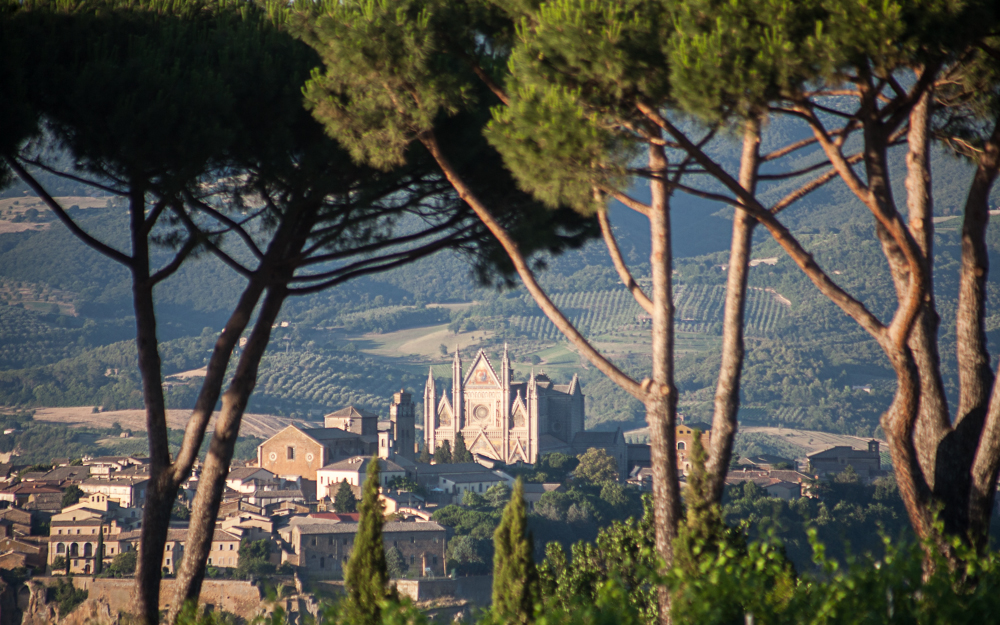 Orvieto through the pines

In Tuscia, the ancient land of the Etruscans with Orvieto at its heart, the pines have been under attack for years. Avenues of pines planted to shade main roads before the war now have gaps like a street-fighter’s missing teeth. They are never replaced if damaged or diseased, one day in the future my  eleven year old daughter may no longer see the impressive avenue that leads to the top of the hill overlooking Orvieto. 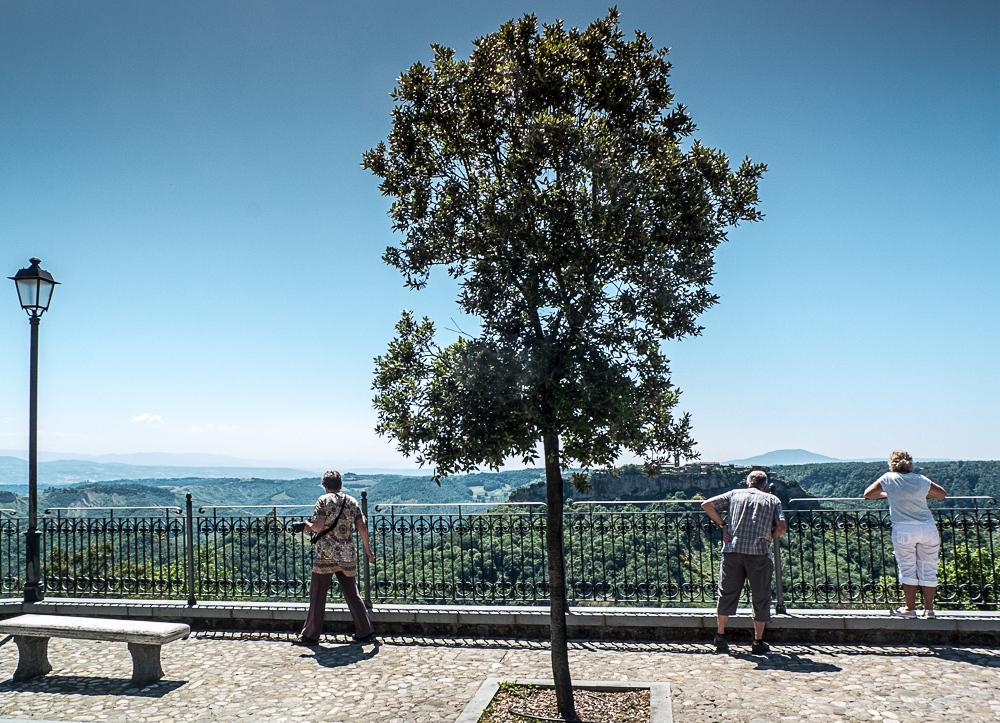 The pines that shaded us when we photographed the evocative hill town of Civita di Bagnoregio from nearby Lubriano were ruthlessly, and quite unnecessarily hacked down in 2010 to be replaced by gnomish slow-growing oaks that provide no shade whatsoever. The Stone Pine below which the old tobacconist in the piazza remembers being planted as a youngster was felled in 2011 despite local opposition. The piazza is now empty – and shadeless. 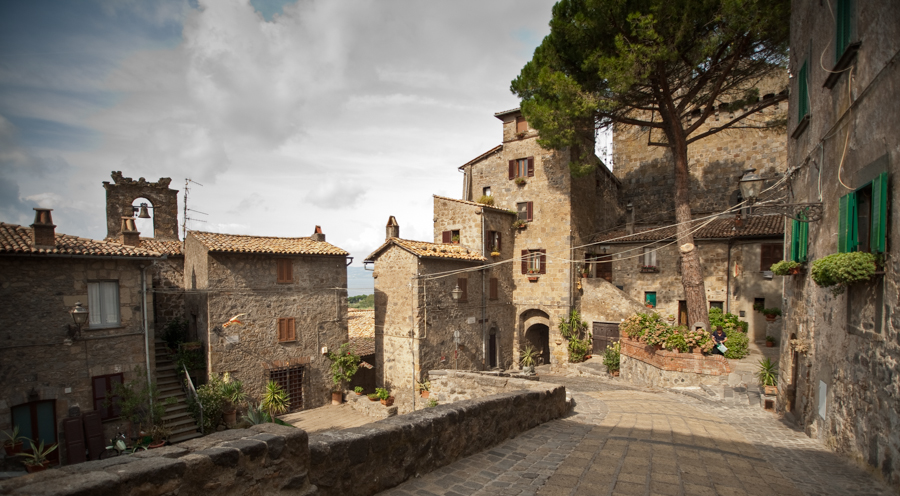 Pine in Bolsena – sadly no more

So Nicholas is on the counter attack. My first effort ended in failure. In 2008 we planted a 5 year old pine beside the road on the hill opposite Orvieto from which Turner painted his landscape. It was cut down 6 months later in September by a local peasant who ranted on about his olives.  So we tried again, this time on the other side of the road on a friend’s land. Our cat Oti was buried beneath it 6 months later. 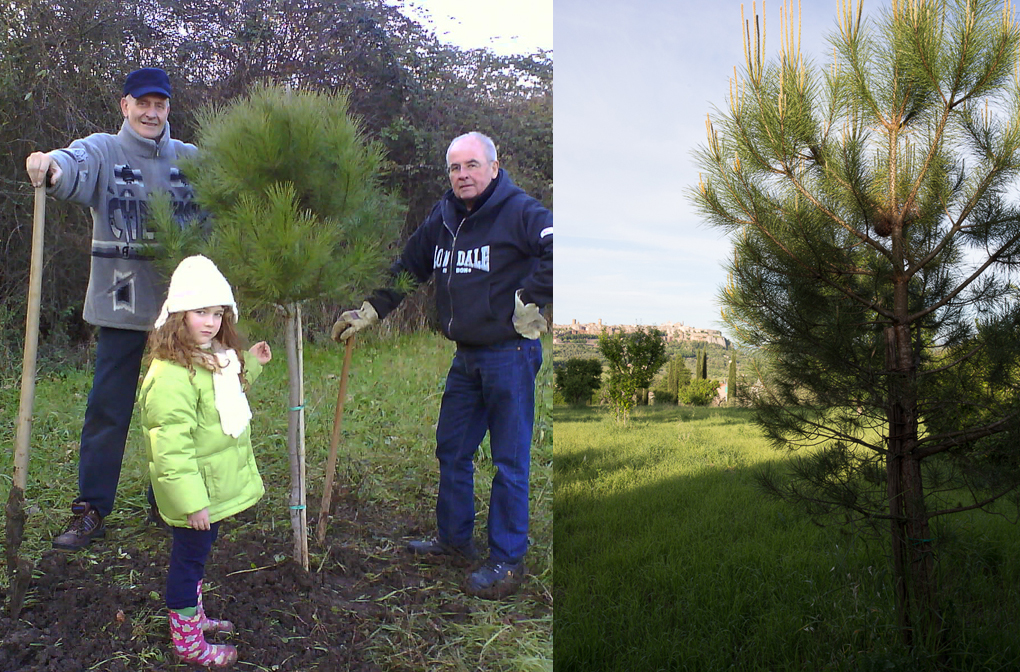 Since then we have planted three more, one within the city walls of Orvieto, a second just outside and this one ‘Hugo’ (Allegra loves the musical Les Miserables) at Vulci near the Tyrrhenian coast. For years I have badgered the staff at the Archeological site to plant some trees to provide shade for the visitors’ car park – to no avail.

In a few years time I hope to park my car in its ample shade, but I imagine as the only substantial tree in the car park there will be a bit of a fight for the privilege.

Hamadryads are nymphs associated with trees, each one having its own Hamadryad. They are not immortal, they share their destiny with the tree: when the tree sickens and dies, so does the nymph. In my picture below called Hamadryads  one nymph is dying alongside her host, felled by high winds; the other clings to the trunk, safe for the time being, but for how long?

If any Hamadryad espies Daniel Buren passing anywhere near her tree I suggest she knee him as hard as she can in the pinoli. 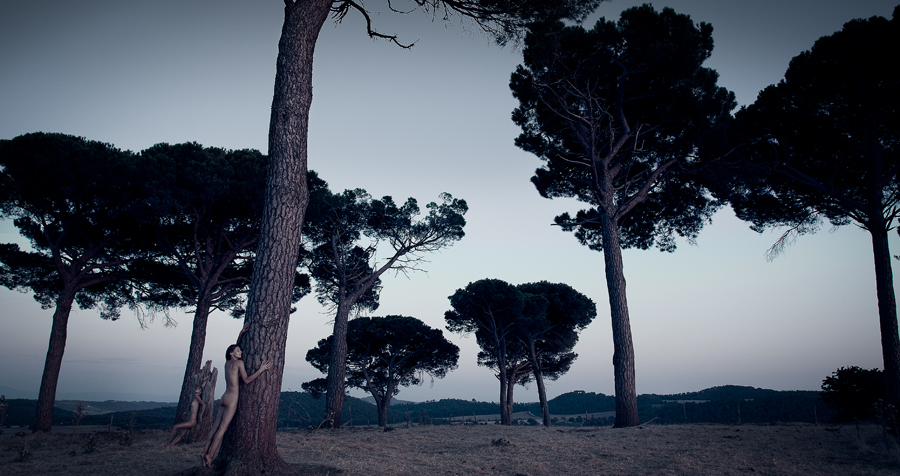