VULCI is one of the most picturesque spots in Italy and one of Camera Etrusca’s most popular photographic excursions.

It boasts Etrusco-Roman ruins, a sinister mediaeval castle, an ancient high bridge, a deep canyon under stalactite cliffs, a rushing waterfall and a deep lake.

Vulci was a rich and important Etruscan city founded about 800 BC. It was continuously inhabited for about a thousand years until definitively abandoned in the dark ages owing to the twin ravages of malaria and Saracen pirate raids, degenerating into desolate moorland, the sight that greets us today. And yet there are features, a few ragged ruins of the Etruscan city on the skyline and the dark tower of the castle standing by its devil’s bridge, redolent of Browning’s Child Roland to the dark tower came.

The mediaeval Castle was once a customs post between the Papal States and the Archduchy of Tuscany. The narrow bridge, just wide enough for a horse and cart, spans the deep ravine of the river Fiora. The castle and bridge can be very evocative at the end of the day, not to say sinister, with rooks whirling around the dark tower.

a maze of passages under a Roman 'Domus'

The ravine is interesting topographically. The stream runs over blue-black basalt rock worn by millennia into weird shapes but the cliffs of the gorge resemble the crests of giant waves, curving stalactites formed by the lime rich waters pouring over the edge. Further along the stream plunges over a waterfall into a deep lake below basalt cliffs. This is where we tarry for our picnic lunch and a swim.

The VULCI photography excursion is a favourite for Camera Etrusca photographers. Here you can practise long exposure photography with Neutral Density (ND) filters to blur the water, fill-in flash, improvised location flash in the penumbra of stalactite caves, portraiture among the rocks and water….. 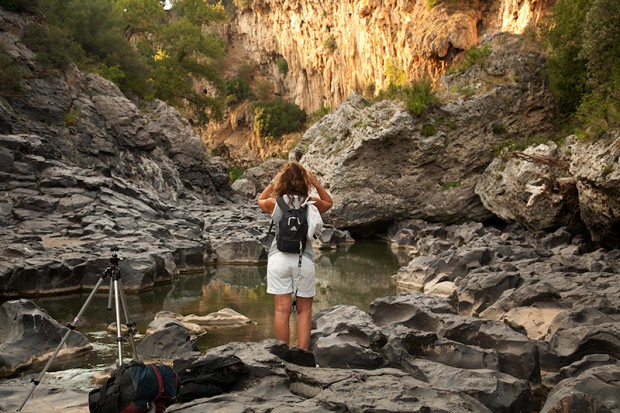 a photographer sets up her tripod by the rapids

D.H.Lawrence wrote a charming travelogue in 1929, Etruscan Places in 1927. He visited several sites in our area, Tarquinia is near Vulci. His brilliant account is well worth reading before visiting Etruria. You can order Etruscan Places here from Amazon
Another traveller who left a fascinating and eminently readable but scholarly book is George Dennis who visited Vulci in 1837. It is in the public domain so you can read Cities and Cemeteries in Etruria for free here

The archeological site was discovered by Lucien Bonaparte, Napoleon’s younger brother in 1828 when a team of oxen fell into a grotto, an Etruscan tomb. He then embarked on one of the greatest archeological digs of all time. There’s hardly a major museum in Europe that does not hold an artefact from Vulci. Bonaparte, prince of Canino lived nearby at Musignano. His home was once chock full of priceless Etruscan treasures, but now the old monastery stands sad, deserted and lonely on the road to Vulci. Bonaparte means literally the most part and that’s what Lucien kept for himself. 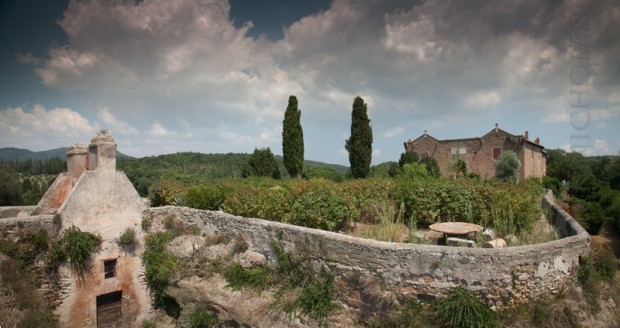 Photo Excursion to Castro on our Photography Tour in Italy. What will I learn? photography techniques